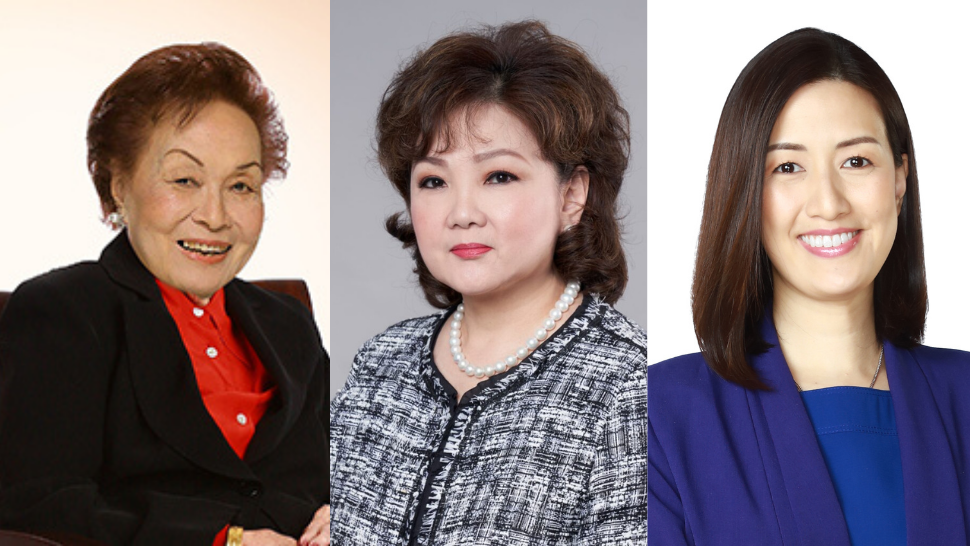 Only a few decades ago, every Forbes list was a men’s club with only a handful of women breaking into the top 100. But now, more and more businesswomen and business founders find themselves among the wealthiest people in the world. In the Philippines, the women with the highest net worth occupy the chairwoman’s seat on boardrooms, lead companies as CEOs, and play important roles in the biggest conglomerates in the country.There are plenty of millionaires in the Philippines, but for this list, we'll zero in on the female dollar billionaires.

Here are 11 of the richest women in the Philippines:

The Sy siblings have a collective wealth of $16.6 billion, divided among the six heirs of the late industrialist Henry Sy Sr. The six now run SM Group as a unit, but as siblings, they are led by Henry Sy’s eldest—Teresita Sy-Coson, or TSC to the SM team. According to Forbes, TSC’s individual wealth is estimated to be $2.5 billion.

At 71, she is the co-chairman of SM Investments Corp., chairperson of BDO Unibank, advisor to the board of SM Prime Holdings, and chairperson of SM Retail. TSC graduated from the Assumption College with a Bachelor of Arts and Science degree in Commerce, majoring in management.

The second child of Henry Sy Sr., TSC’s sister Elizabeth comes in second place with an estimated wealth of $2.2 billion, according to Forbes.

At 69, she is currently an advisor to the boards of SM Investments and SM Prime. Elizabeth oversees the family conglomerate’s hotel hospitality and leisure arm as chairperson and president of SM Hotels and Conventions and co-chairperson of Pico De Loro Beach and Country Club. Sy graduated with a degree in Business Administration from Maryknoll College.

At 86, Soledad is the widow of Eduardo “Danding” Cojuangco, the former San Miguel Corp. CEO. Upon his passing in 2020, Soledad inherited her late husband’s $1.42 billion estate alongside their four children, Mark, Carlos, Luisa, and Margarita. At the time of his passing, Cojuangco was the chairman and CEO of San Miguel Corp., Ginebra San Miguel, and Petron Corp.

Betty Ang is the president of Monde Nissin while her husband, Hoediono Kweefanus, is the vice chairman. Her brother-in-law Hartono Kweefanus runs the company’s day-to-day operations as chairman, while Hartono and Hoediono’s brother-in-law (the husband of their sister) Henry Soesanto is the CEO.

With a net worth of $1.25 billion, the Gotianun family matriarch is fifth on our list. Gotianun is the chairperson emerita of Filinvest Development Corp., which she co-founded with her late husband Andrew Gotianun Sr. in 1955.

Filinvest is one of the biggest property developers in the country. At 93, Mercedes lets her daughter Josephine run day-to-day operations as the company’s president and CEO. Prior to her role as chairperson emerita, Mercedes was the director of FDC from 1980 to 2019 and CEO of Filinvest Land Inc from 1997 to 2007. A UP graduate, she is currently also a director at East West Bank, Pacific Sugar Holdings Corp., and FDC Utilities Inc.

As the married co-founders of Converge ICT Solutions, a public company, Maria Grace’s net worth is tied to her husband’s, Dennis Anthony Uy. As CEO, Dennis Anthony receives most of the media attention, but Maria Grace is currently the president, chief resource officer, and executive director of the company.

A certified accountant, Maria Grace graduated from De La Salle University with a Bachelor of Science in Accountancy. Together with her husband, the two have a shared net worth of $2.8 billion and are the newest self-made billionaires in the Philippines.

Like the Uys, the Cos are a married business couple that share management of their conglomerate, Puregold Price Club, a supermarket chain with stores located all over the country. Their combined wealth is estimated to be $1.7 billion.

Susan Co is the vice chairman of Cosco Capital, the company that owns Puregold Price Club and S&R Membership Shopping. She is also a director at the Philippine Bank of Communications. Susan graduated from the University of Santo Tomas with a Bachelor of Science Degree in Commerce.

All six siblings have a shared net worth of $4 billion.

The four Ty siblings run Metrobank and GT Capital after their father, the tycoon George Ty, passed away. Led by Arthur who is the chairman of GT Holdings, the Ty siblings also include Alfred, Alesandra, and Anjanette. Together, they share a wealth worth $2.2 billion.

Another set of siblings on the list are the Consunji siblings who share a net worth of $1.8 billion. The siblings are composed of Isidro, who is chairman and CEO of DMCI Holdings, and Jorge, Josefa, Luz, Maria Cristina, and Maria Edwina. The family’s wealth comes from construction and coal, namely DMCI Holdings and Semirara Mining and Power Corp.

Sisters Maria Cristina, Maria Edwina, and Luz all sit on the board of directors at DMCI Holdings, but all sisters (and siblings) own significant stakes in the family conglomerate.

Together, the eight heirs of Mariano Que have a net worth of $1.65 billion.

The Most Expensive Designer Shoes We Spotted in Carmina Villaroel's Collection