And she never gave in to sadness. 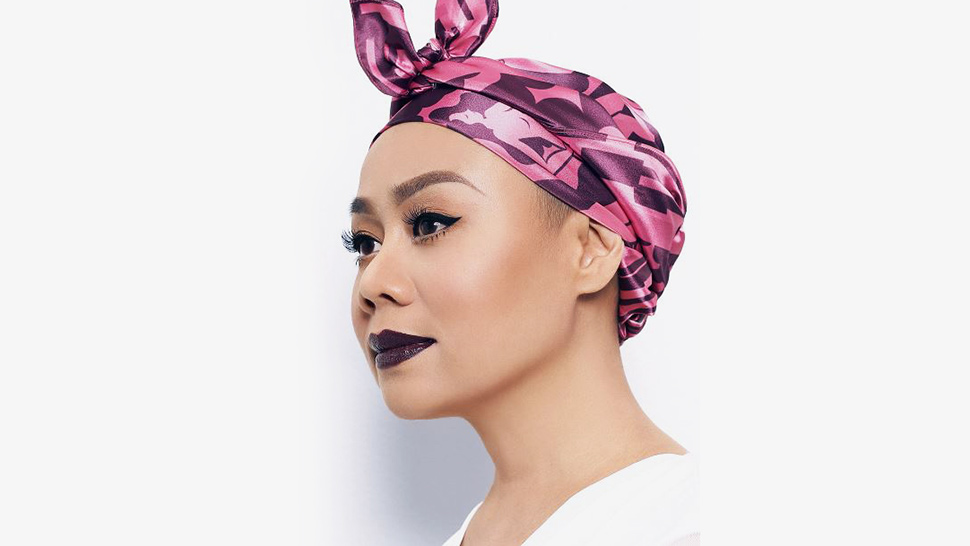 Last March, I was diagnosed again on my right breast. I had a radical mastectomy for it, so now I'm completely flat. My left breast was removed 12 years ago. I was so used to the single-breasted life, had been featured in magazines with it, and I never expected cancer to come back. But it's in my blood: I'm the third generation in my family who got breast cancer. So when I felt the lump for the second time on my right breast, I said, I'm just going to have it removed without knowing whether it was benign or malignant. Lo and behold, it was malignant, but good thing it was stage 1. I was very aware of my body. Did four sessions of chemo, and now my hair is starting to grow back. Actually, that was what I got depressed about—losing my hair. It was down to my waist! That's the kikay in me!

I was 6 years old when my mom got breast cancer. I grew up seeing her with one breast, so I never had any issues with it. The first time I suspected something, I was lifting up my 10-month-old son, and he accidentally kicked me in the breast and it was so painful that I almost dropped him. That was what prompted me to see my doctor. I had a lumpectomy, and they found out it was stage 1. Since he was also my mom's doctor, he knew it was aggressive. I was 28 years old at the time, and the median age for breast cancer was 40. My grandmother was 50 when she got it, my mother was 40—so it's been hitting each generation earlier by 10 years.

My son is now 13, and we love to travel, but last summer, I told him, "Okay, Yahu, this will be the most boring summer ever." He said, "It's okay, Mom, at least we get to go on trips to the hospital." He grew up with my cancer, and with me and his lola as the most significant women in his life, there was a time when he thought it was the norm for a woman to have only one breast! I was a single-breasted mom with a single child. Now, I'm just fabulously flat.

Yoga keeps me sane and together. It's the calm after the storm/ I first tried Bikram yoga in 2008 after having researched extensively about the benefits of yoga in preventing cancer. In 2011, I became a certified instructor. I went straight back to teaching yoga after my second mastectomy and round of treatments. I always joke with my class that I will wear shorts and go topless like my male students. They're very supportive. I want to get rid of the excess meds in my body, so I supplement with acupuncture, colemas, and an organic diet. It makes me feel good that I'm also doing something more about it. I was always physically active—having done ballet and gymnastics before I got into yoga—and led a healthy lifestyle. It's just one of the classic examples of your genes catching up with you. I experience a different kind of bliss after the final namaste, knowing I have helped my students take care of themselves and explore the infinite possibilities of their bodies.

I'm like the poster girl for ICanServe—whenever someone needs a breast cancer survivor with one breast, or scars, or no breasts. I'm always willing to be photographed or share my story. It's fulfilling on my part. I'm not the type to get depressed. I always have a positive attitude. No matter how many treatments you get, they're not going to work without a positive attitude! I want to encourage others also. Having had it twice, life still goes on.

Here's A 3-day Itinerary For Your Next Trip To Taipei, Taiwan