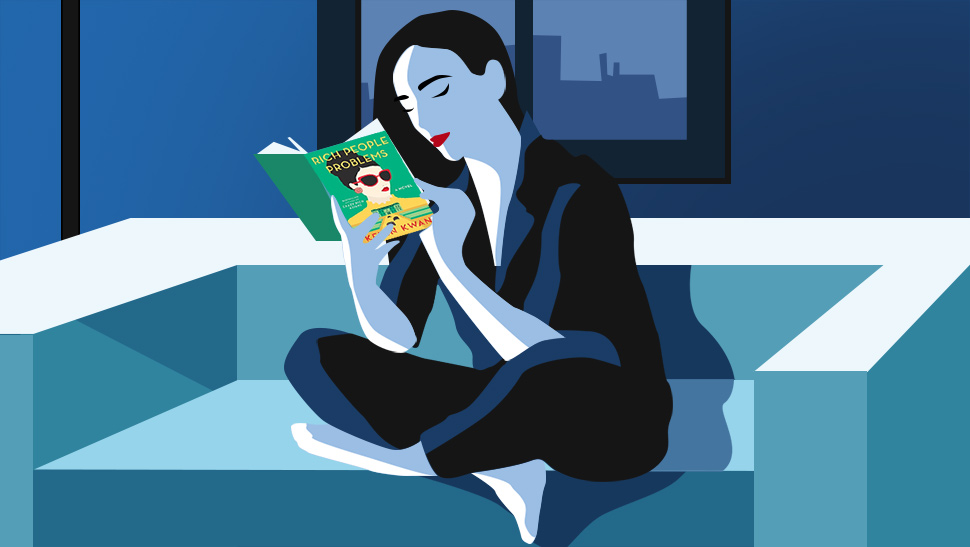 Kevin Kwan is a Singapore-born, US-based novelist. His first novel, the international bestseller Crazy Rich Asians, was in some ways inspired by his own life. A quick search into his family background shows that he hails from one of those establishment families his characters are so fond of, and he claims all the events are based on real-life events. Following the success of his first book, he wrote China Rich Girlfriend. Rich People Problems is the final book in the trilogy. A little known fact about him is that he holds a degree in Creative Writing from the University of Houston and a BFA from Parsons School of Design, the school that serves as a backdrop for Project Runway. To top it all off, he also has his own creative studio in Manhattan. Talk about the overachieving Asian stereotype!

“The point, is Ah Ma uses her fortune to control the family. She’s always changing her will according to her latest whim.” Nick Young, the protagonist, succinctly captures the plot in an accusation directed at his grandmother, Shang Su Yi. And only someone of incredible wealth could have a hold on her already-rich family like the matron of 64-acre Tyersall Park.

The final book in the trilogy opens quite literally with rich-people problems. An Airbus 380-800 double decker is ordered by the Singapore Minister of Defense to turn around and return because Su Yi is having a heart attack and her cardiologist Professor Oon is sitting in first class.

With the matron on her deathbed, everyone from Hong Kong (the Chengs), Thailand (the Royal Aakaras), and the UK (the Imperial Shangs) is pouring in to get in the old lady’s good graces before she kicks the bucket, natch. All except Nick who is hidden away in New York, estranged from his family, and things will stay that way if the pompous Eddie Cheng can have his way.

Even at the start of the novel, the love story between Astrid Teo (née Leong) and Charlie Wu promises to be juicy. Michael Teo delivers on his promise to drag the Leong name through the mud and Astrid’s extremely private parents are furious. Not only does it also endanger both hers and Charlie’s respective divorce cases, but it also pushes Isabel Wu (née Lai) off the edge. Astrid just might lose everything—love, family, and money. Colette Bing resurfaces across the pond, already arisen from the epic takedown by Rachel Young (née Chu), and ready to once again take on Asia. Kitty Bing (née Pong, but she was once a Tai) continues her play for power as evidenced by her latest choice in husband and displays her strong pull in the international fashion community.

Sorry to disappoint, but the Philippine subplot is miniscule; the only things that are worth mentioning are the Neil Felipp Suzy Wong minaudière, a broken Ramon Orlina glass sculpture, and Matinloc Island in Palawan.

Let’s begin with all the best fashion moments! Kitty hosts a party that Anna Wintour, Karl Lagerfeld, Michael Kors, and Philip Treacy attend in Shanghai, and she flies Nigel Barker, Charlotte Tilbury, and Jo Blackwell-Preston to Singapore for her magazine feature. Eddie Cheng redefines shoe lust to great comedic effect. Araminta Khoo (née Lee) is the proud owner of a Neil Felipp creation. Astrid starts a fashion line that could very well be Vivien Ramsay’s Eairth. And we’re brought into the inner sanctum of Giambattista Valli’s atelier for a couture fitting—but we’re not telling who’s getting fitted, because it’s none of the usual suspects!

Kwan’s prose is fun, easy to read and, at times, laugh-out-loud funny. It’s difficult to put down once you find a storyline you’re particularly invested in, and the Astrid-Charlie pairing hooked me in early on. Just like the other books in the series, its setting gives it a familiar Asian flavor, and Kwan provides dead-on social commentary with lines such as “But these Singaporeans are so awed by ang mor (foreigners) with a two-bit title that they just bow and scrape away like subservient little toadies.” He gives us a very real look at overseas Chinese’s traditions and Asia’s avoidance of the discussion on mental health. More than one character is battling mental illness but their treatment is kept under wraps, so it doesn’t destroy their families’ reputations. And for all the speculation of who will inherit the house (“We have all known since the day Nicky was born that it was meant for him. He’s a Young.” and “Astrid? Never, lah. Su Yi is so old-fashioned, she would never leave the house to a girl!”), it does leave a question as to why and how it was Su Yi who became the heir of Tyersall Park, instead of her brother Alfred Shang. It also plays into the tropes of the kuripot Chinese. And for those of us who went to Chinese schools, the wide divide we put between ourselves and the G.I.’s, our nickname for Mainlanders.

Appearances and family drama, with the trappings of obscenely decadent wealth, are central themes to the novel. Though we all know a few overcritical titas, these aunties are on another level. Whether it’s physical or social standing, these Crazy Rich Asians will do anything to keep everything status quo. You know these people seriously care about looks when Eleanor Young tells her son, “Those puffy lines under your eyes… I’m not happy with them,” on their way to the funeral! If there was any time to look a little less put-together, this would be it. But that would be a chink in their armor and they have to protect their image, and with it their wealth, lest they be open to attack.

The story is not without its touching moments. There were times when I felt it was a more opulent Joy Luck Club, as it delved into Su Yi’s relationships with her daughters, Felicity Leong (née Shang) (“Everyone will be looking at you because you’re my daughter. Do you want to disgrace me…?”) and Victoria Young, which triggered a memory of Su Yi with her own father Shang Loong Ma. At its heart, the Youngs, T’siens, Shangs, Leongs, Khoos, Wus, and even Bings are all just trying to navigate the drama of family politics, except it’s dressed up in so much money, designer labels, luxury locations, and fancy restaurants.

P.S. If you’re as unschooled in Manila society as I am, then you must be dying to find out who the fictional Filipino “host with the most” Diego San Antonio is because that name is listed in the book’s acknowledgements.

To anyone who’s too keen on picking up on society references or wanting to imagine a luxe getaway before summer ends. We do have the insane heat to match Singapore’s after all.

Rich People Problems by Kevin Kwan will be available on bookstands on May 23, 2017. Secure a copy by pre-ordering yours from National Bookstore through this link.

6 Things You Need To Stop Doing Behind The Wheel

Here's How You Can Visit Indonesia's Dreamy Rainbow Village