SHOP: The Preview Beauty Bag Is Officially Here and It's the Ultimate Steal|Read more »
Culture | By Lily Grace Tabanera for Cosmo.ph - Nov 20, 2020

Here's how they pulled it off! 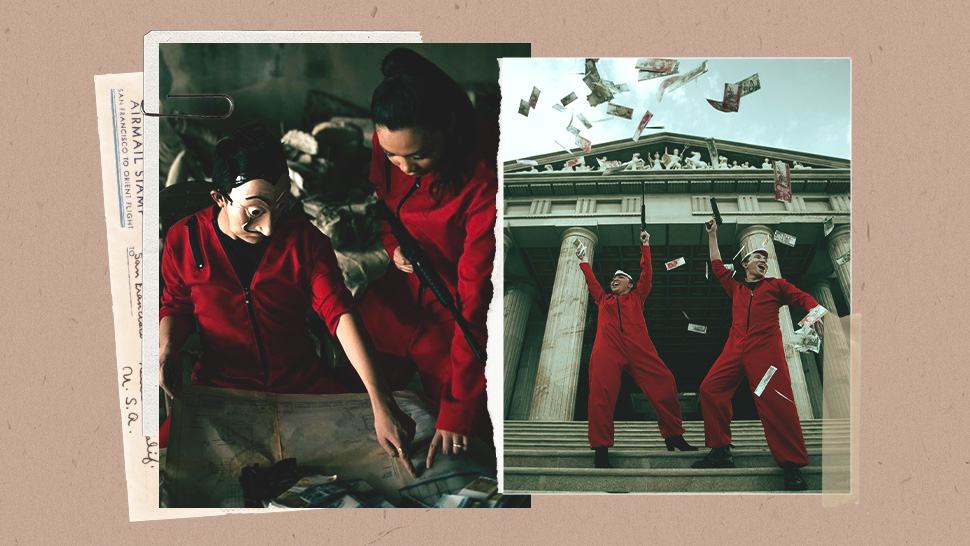 The now-viral engagement shoot made use of Temple of Leah in Cebu as the Royal Mint of Spain. The couple also wore Salvador Dali masks and red jumpsuits and had paper money to throw around. The photos, which were taken by photographer Hafid Caballes, are so vivid that we can almost hear them singing Bella Ciao.

Photographer Hafid Caballes, who is also a huge fan of the show, revealed how they pulled it off in an interview with Cosmopolitan Philippines via Facebook Messenger:

What kind of preparations did you make for the shoot?

Hafid: Prior to the photoshoot, I did some research to refresh my memory on the different scenes and to gain inspiration [for] the poses to be directed to the couple. I also conceptualized a mood board to really get the feel and idea for the upcoming shoot. Through this, I was able to give some suggestions to our stylist, Geof Lagria, for the props to be used. As for the editing part, refreshing my memory on the scenes gave me an idea of the color grading to be applied [to] the photos based on the show's actual colors. Searching for the perfect location for this shoot was not difficult at all as our stylist carefully picked it to fit the whole theme.

Could you tell us about the actual shoot day itself? Did you encounter any challenges?

Hafid: At first, I was anxious if we could pull off—and give justice to—the concept considering that the couple were not actors and were working in a field far from the acting/modeling industry. However, as we began shooting, the couple were both very cooperative and into what we were doing. This made work enjoyable and effortless. I could really see that they were enjoying posing and reenacting the different scenes from the series.

What's your favorite photo from the shoot?

Hafid: My favorite photo was the one shot in front of the building with money flying around the couple. It is my favorite shot as it depicts victory. It also captured the couple's raw emotion of their success. Another reason [is that] the building's appearance looked a lot like the one in the series. So in one picture, the whole concept of the shoot was summarized.

They even recreated the poster!

ABS-CBN reports that the Temple of Leah, also known as the Taj Mahal of Cebu, is a shrine that holds the "memory and treasures of Leah Albino-Adarna, the late wife of Teodorico Soriano Adarna."

Money Heist, which tells the story of a group of thieves who undertake a heist on the Royal Mint of Spain, is available for streaming on Netflix. The fifth season is currently under production and will be the show's final installment. A Korean adaptation of the series is also in the works! Find out more about it here.

5 Gorgeous Themes For Your Intimate Wedding