LOOK: Barbie Imperial Is Normalizing Stretch Marks on Her Chest and We’re All For It|Read more »
Culture | By Chelsea Garcia - Jan 27, 2022 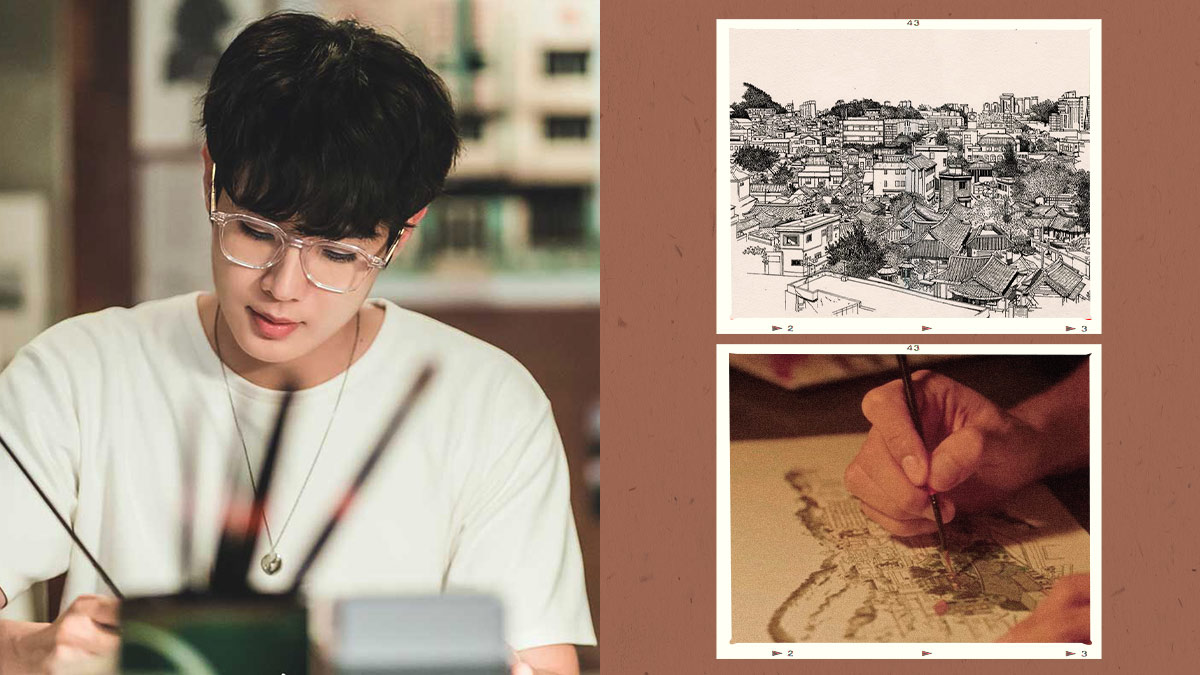 If you have a penchant for Korean rom-coms then most probably, you’re familiar with the series Our Beloved Summer. The story revolves around ex-lovers, Choi Ung (Choi Woo Shik) and Kook Yeon-soo (Kim Da Mi) who were reunited through Ung's artwork five years after their bitter breakup.

Aside from the well-written plot, we were also captivated by the impressive drawings of Choi Ung, who goes by the pseudonym Go-oh in the series. We couldn't but wonder who the real artist behind the artworks was, and if you’re also curious, we have all the details for you right here.

Who made Choi Ung's art in Our Beloved Summer?

The artist behind Choi Ung’s works is none other than French illustrator Thibaud Herem. And like the main character of the series, Thibaud is known for architectural drawings with an extraordinary level of detail. In fact, because the level of intricacy in his artwork, each one can take around 100 to more than 700 hours to finish!

Finally, Thibaud's work is also coveted by celebrities, parallel to Choi Ung whose work is admired by NJ, a famous idol singer (Roh Jeong Eui). Just last year Thibaud was commissioned by RM of BTS to draw a beautiful cherry bonsai tree in blossom. It's said that the piece is displayed in the Korean star's home.

With his caliber, it's no wonder Thibaud's works were chosen to be featured in the series. According to his Korean agent, it was early last summer when Thibaud was commissioned to create illustrations for the series and have a few of his old works featured. "Thibaud’s work, which took hundreds of hours by stacking 0.1mm lines, can be beautifully delivered to many people through the main character, Choi Ung," the agent said in an Instagram post.

In case you need more proof, did you know that Thibaud had a cameo in the second episode of the series? It was when Choi Ung's best friend was convincing him to accept Yeon-soo's proposal, saying that building was designed by his favorite architect Jean Ferrat. A photo of Thibaud was actually in the papers, implying that he's Jean Ferrat. How clever!

Scroll ahead to see some of Thibaud's artwork featured in Our Beloved Summer!

This illustration of Choi Ung’s neighborhood in the series was shown when his career as a renowned illustrator was revealed in the first episode.

These three creations were featured in the second episode, particularly in the scene where NJ visited the studio of Choi Ung for the first time.

This sketch can be seen towards the end of the second episode when Choi Ung was drawing a particular street in their neighborhood. ICYDK, in real life this street is located in the famous Bukchon Hanok Village in Seoul.

If you’ve been watching the series, you would know that Choi Ung draws buildings that were designed by his favorite architect. IRL, this is one of Thibaud Herem’s fictional architectural drawings depicting spring.

Renamed as the “Seoul Hardware Store” in the show, Thibaud shared how easily this building became one of his favorites when he was asked to draw it.

The “Winter Tree,” as Thibaud Herem calls it, appeared in an Instagram post of Kim Da Mi. Look closer and you'll notice that she's wearing the couple shirt she and Ung wore at their amusement park date!

Our Beloved Summer featured several tourist attractions in South Korea as illustrations. This includes the amusement park Lotte World, where the couple broke up for the fourth time.

See more of Thibaud Herem's work on his Instagram.

12 Effortless Ways to Wear a Button-Down Shirt, As Seen on Kim Da Mi in "Our Beloved Summer"

8 Minimalist Designer Bags to Invest in, As Seen on Kim Da Mi in "Our Beloved Summer"

It's Official! Park Seo Joon And Han So Hee Are Starring In A K-drama Together