JUST IN: Jinkee Pacquiao Is One Glamorous Ninang at a Wedding Wearing Accessories Worth at Least P10 Million|Read more »
Culture | By Sam Beltran - Dec 16, 2019 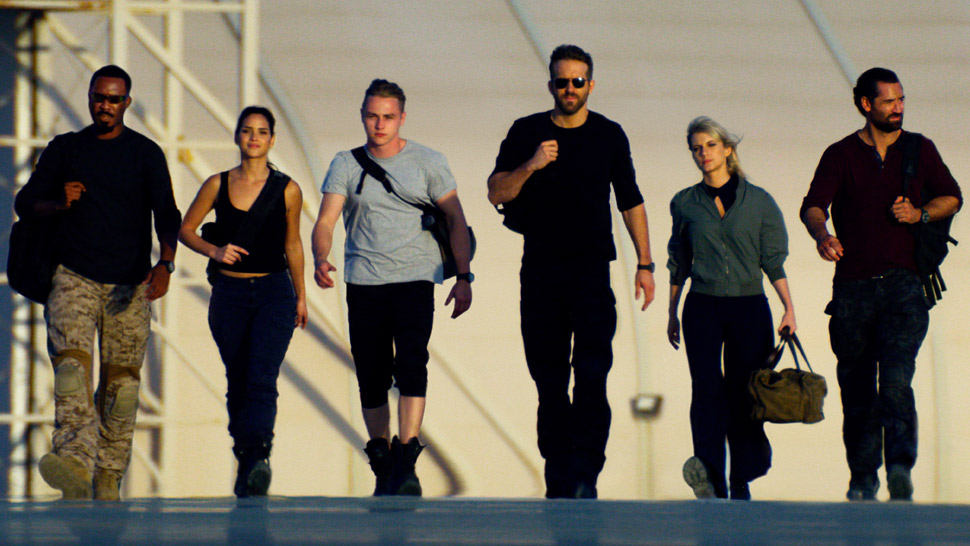 When it comes to Michael Bay films, you can spot them from a mile away. Think of Pearl Harbor, Armageddon, Bad Boys, and the entire Transformers franchise: elaborate car chase sequences, heart-throbbing action scenes, and a bombardment of chaotic, visually arresting effects that only seek to rival the adrenaline rush one can get at, say, a 360-degree roller coaster or a gravity-defying trapeze. And of course, who can forget the explosions? It’s clear that Michael Bay continues to be a commercially successful director, promising larger-than-life and shock-inducing cinematic experiences for the silver screen.

This time, Michael brings his blockbuster style to the streaming crowd with his newest film, 6 Underground, his newest film, and the director’s first movie with Netflix. If his signature grab-popcorn style isn’t enough to convince you to give 6 Underground a chance, then maybe its star power will. Enter Ryan Reynolds, a billionaire-turned-vigilante who assembles a group of underground heroes who escape from their pasts in order to change the future. The film brings together a cast of international stars, including French actress Mélanie Laurent, Adria Arjona, Manuel Garcia-Rulfo, Ben Hardy, Lior Raz, Payman Maadi, and Dave Franco.

Each of the unlikely heroes has faked their own deaths and erased any trace of their existence for individual reasons, taking arms to do the jobs the government doesn’t want to do and allowing them the freedom to battle the bad guys at no cost, by any means necessary.

So, is 6 Underground worth the stream? We rounded up the highs and lows of the film so you can decide for yourself.

The movie opens with a frantic car chase on the streets of Florence, Italy and immediately kicks the film into high gear—no crescendo, no gradual easing into the story. It’s shocking and jarring and deliriously entertaining, with Ryan and Dave the clear pilots in the prolonged opening sequence as they play off each other’s comedic strengths and zany energy while being hopelessly chased by a number of baddies. Much has not been revealed about Ryan’s character who is only known as One—all of the operatives are known by numbers, not by their names—as well as the rest of the crew, yet we are expected to root for them and gasp at every twist and turn.

Dave, who plays the reckless and frenetic getaway driver, almost runs over a baby, some puppies, and a group of nuns as they all unravel in exaggerated slow motion. It’s the kind of scene that teeters on the crass and cheeky with a wink to the audience. In similar Deadpool fashion, the movie seems to acknowledge, “No, we’re not winning any Oscars tonight, but we’re here to entertain.”

Ryan Reynolds brings his signature charm to the film.

Ryan is one of this era’s most definitive movie stars, with a comedic timing that’s so distinct and yet so current, a mix of cheeky schoolboy charm and the smarmy dry humor he’s always known for. Ryan is even more instrumental to the movie’s success than its barely-there plot, as it clearly hinges on his snarky delivery and the uncanny ability to never take things seriously, almost to the point that the movie feels that it was written for him.

That is no coincidence: The script was written by the Deadpool duo, Paul Wernick and Rhett Reese, who are tasked with the responsibility to write hilarious one-liners and zany banters for Ryan to really shine, as well as give the viewers a taste of the well-loved Deadpool humor. So yes, this is a movie featuring a wise-cracking Ryan Reynolds playing a wise-cracking character with wise-cracking lines.

There is never a dull moment in this movie.

If anything else, the movie is pure entertainment at best, as it panders to our basest of instincts and senses. 6 Underground is a visual spectacle that is as bold as it is loud, and we mean really loud: In the midst of the aural assault of explosion after explosion and classic high-stakes yelling in elaborate heists, we’re treated to a deluge of visual effects. There's the quintessential 360-degree hero shot, slow motion sequences, and the unbelievably physics-defying stunts.

One scene particularly stood out in its clever use of parkour in the Hong Kong sequence that shows up in the middle of the film. There is also a climactic scene that makes clever, if not completely unrealistic, use of magnets.

The movie features a strong ensemble.

Besides Ryan, one of the delights of the film is seeing an international roster of stars, a mix of accomplished A-listers and promising up-and-comers that contribute their own sense of charisma and talent to the movie. Multi-awarded actress Mélanie Laurent plays Two, a tough-as-nails ex-CIA agent and femme fatale whose kickass moves and stunts awe and inspire—nevermind that she is the exact opposite of her character in real life, feminine and elegant.

Ben Hardy, who recently starred in the critically acclaimed Bohemian Rhapsody alongside Rami Malek, is also one of the breakthrough stars in 6 Underground, a fearless former thief and parkour extraordinaire who displays a crack of vulnerability beneath a scrappy veneer. It’s a nuanced take on a character in the midst of an explosive, high-stakes B-grade action movie.

The movie suffers from a thin narrative and character background.

This already comes as a given, as Michael Bay films have never been applauded for a strong and engaging plot, instead deciding to compensate for actual content and substance with massive eye candy. It’s worked tremendously on his part commercially: The Transformers series grossed over $4.3 billion (approximately over P200 billion) around the world.

Still, in the ever-prevailing superhero genre in the global film industry, and the phenomenal success of the Marvel Cinematic Universe in its ability to weave together a decade-long lore, it is underwhelming to watch a film that eschews any sort of plot or narrative especially in an increasingly competitive market.

Let’s not even talk about the crux of Ryan’s mercenary crew, a coup plot to overthrow the current dictator in a fictional Middle Eastern country that borders on political insensitivity. True, 6 Underground is pure escapism and is not meant to be rousing political or social awareness in any form, but the concept is a hodge-podge on real-life world events happening in real countries: Several thousands of children, women and men are victims of political unrest, hunger and war, whose homes have been ravaged and lives at the mercy of dictatorship.

Yet even at the most blatant disregard of its quasi-political themes, the story is lacking in elements and character back stories in order to fully appreciate the movie in its entirety. Very little is known about the doctor only known as Four, played by Adria Arjona, whose story 6 Underground chooses to skip entirely. We know nothing about her background, her ambitions, or her motivations for joining the group, and the character hardly fares in any of the action scenes either save for the opening scene where she heroically attempts to stitch Two’s wound in a rapidly speeding vehicle, while the latter continues to shoot and ward off the villains. The absence of her story practically relegates Adria to mere eye candy, a 2019 stand-in of Megan Fox in the Transformers franchise.

Even in its most fleshed out characters—Two as a disillusioned former CIA agent and femme fatale, Seven as a hardened ex-soldier battling with PTSD—their stories never become compelling enough to truly understand their reasons and ideologies for leaving behind their former lives and starting again as “ghosts”, with no trace of their existence. It’s a tall order for the cast, including the accomplished Mélanie, an award-winning actress and director herself, and Ben Hardy, who was only recently seen in Bohemian Rhapsody. Still, the individual caliber of each cast member somewhat salvages the glaring plot holes and their charisma tides the viewer over to the end of the movie.

The constant barrage of action scenes becomes numbing after a while.

Music is never enjoyable when it’s in an unrelenting monotone—it needs lilts, crescendos, a key change, other musical elements, and a soundtrack fade. While the movie began with a memorable opening that sets the tone for the rest of the two-and-a-half hour spectacle, 6 Underground largely remains the same afterwards. It’s explosion after explosion and near-death situation upon another. Michael does make use of unconventional stunts and effects that have never before seen in his previous films, but the lack of variety and constant desire to evoke suspense and thrill takes an ironically predictable turn.

6 Underground is largely a high-powered fantasy, as expected in any Michael Bay film—and this is supposed to be the most Michael Bay film of all, with Netflix allowing the director full rein. In a Michael Bay world, there are heroes who fight evil, where the laws of real-world physics are largely ignored, where women get out of bed in full makeup and hairspray-filled hair like they’re fresh off a Victoria’s Secretshoot. We get it, we’re supposed to suspend disbelief, but there is a problem when the fantasy does not stem from actual fantastic elements—no giant talking robots here—but from a lack of human connection. When characters don’t talk the way people are supposed to talk and don’t react the way people are supposed to react, the movie allows for much room for the viewer to zone out.

Michael Bay defined many of the high-concept blockbuster movies we grew up with, packing theaters in the ‘90s and 2000s. There’s nothing ingenious or innovative about this movie and his formula, yet it’s clearly one that works. 6 Underground is, in essence, an old-school Michael bay movie for the Netflix generation—for better or for worse.

If you grew up watching and loving the Transformers series, loved Deadpool, and call yourself an absolute fan of Ryan Reynolds, then there is still much to love about 6 Underground, and its possible sequels.

6 Underground is now streaming on Netflix.

All the New Netflix Releases We're Excited to Watch This December