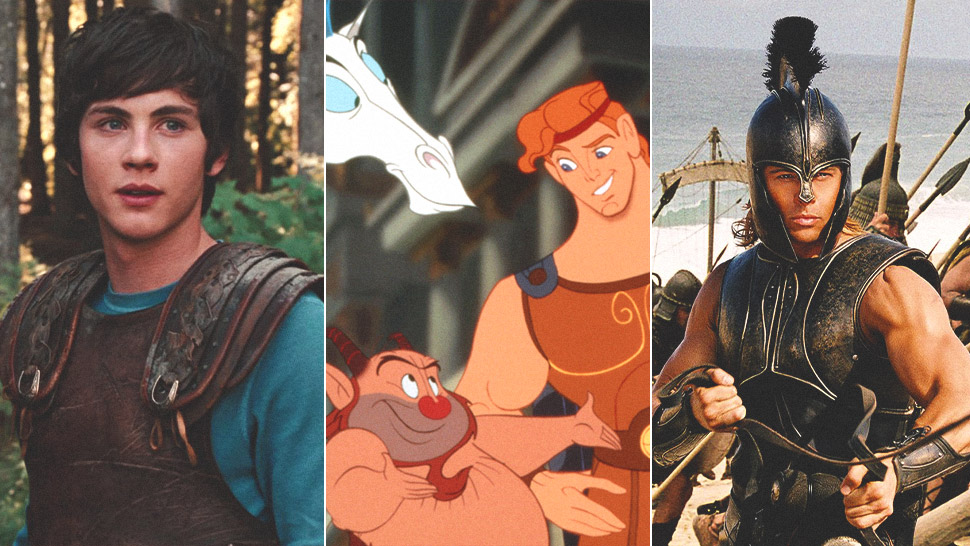 If you're a Disney fan, then growing up you've probably sung along to I Won't Say I'm In Love from Hercules at least once; Meg was such a mood, tbh. But if the animated film characters got you interested in learning their backstories—Why was Hades always angry? Did he really have flames for hair? Who were the Muses, and did they always harmonize when they sang?—then welcome to the world of mythology. The Greeks and Romans had a vast collection of myths and legends that are still referenced in movies and TV shows today.

If you're in the mood for a bit of ancient history (been there, done that—sorry, couldn't resist), we put together a list of several popular films based on Greco-Roman, Egyptian, and English mythology. You're welcome!

Before The Perks of Being a Wallflower fame, Logan Lerman starred in the book-to-film adaptations of Rick Riordan's famous series. Percy discovers that monsters exist when he's brought to Camp Half-Blood (no relation to Harry Potter, sorry). There, he learns that he's not the only child of an Olympian god. But what troubles can teens get up to if they're away at camp? PLENTY, especially if half their parental DNA refuse to acknowledge them.

P.S. The books are a great introduction to the world of Greco-Roman mythology, and Riordan's since written another series on Norse gods—perfect timing if you want to know more about Thor and Loki.

You have not lived if you haven't seen this Brad Pitt onscreen—we're kidding (not really). Loosely based on Homer's Iliad, the film narrates the affair between Paris (played by Orlando Bloom post Lord of the Rings and Pirates of the Caribbean) and Helen of Troy ("The face that launched a thousand ships", she was that pretty). Ever heard of "the Trojan Horse" or a "Trojan virus"? You'll understand the reference once you watch this movie.

"THIS. IS. SPARTA!" As evidenced by Gerard Butler's iconic line, the film—based on a comic series of the same name— is a fictionalized retelling of the Battle of Thermopylae. 300 Spartans are led by their king into battle against the invading Persian army of hundreds of thousands. Who will be victorious?

There's no chance, no way you haven't seen this film. What's not to love? From the famous songs (I Can Go The Distance is a great life motto) to the love story between Herc and Meg, Hercules is a fan favorite for good reason. If you're curious about whether the couple got their HEA, look up the legend of the 12 Tasks of Hercules—don't say we didn't warn you, though!

We're talking about the OG Brendan Fraser trilogy, no disrespect meant to The Rock or Tom Cruise. The franchise is actually based on a mashup of Egyptian myths and legends—Imhotep, Ankhesenamun, and queen Nefertiti were all real people, though! If you dream of visiting Egypt and learning more about the land of the pyramids, you have to give this a (re)watch.

ICDYK, The Sword in the Stone was the last animated film produced by Walt Disney before his death in 1966. In several films, King Arthur and Merlin have been portrayed as strong, powerful men—not in this movie. Here, Arthur is a mere boy of 12, and Merlin is an old man looking for the true heir to the throne. What adventures does the magician have in store for the unaware boy-king?

You know the song The Prayer, a duet sung by Andrea Bocelli and basically every solo pop artist (Celine Dion was first!)? It was originally recorded for Quest for Camelot. This animated film is worth watching for the soundtrack alone, promise. The storyline about the Knights of the Round Table makes it such an underrated classic!

Forget every single insult you've ever used against someone else, because this one is unbeatable: "I fart in your general direction. Your mother was a hamster and your father smelled of elderberries!"

This legendary British comedy about King Arthur and his knights is a cult classic for a reason. The source of many an internet meme ("It's just a flesh wound."), the film will have you crying from laughter from the very beginning.