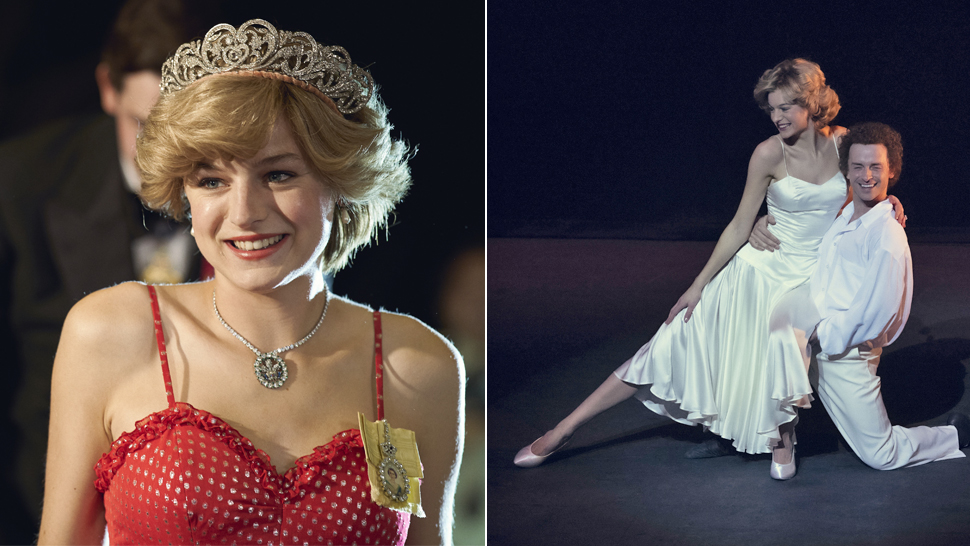 IMAGE Netflix
Let's discuss one of the most talked-about moments from The Crown Season 4.
Shares
Share
Tweet
Comments

The latest season of The Crown has everyone abuzz, with people asking which parts were totally real and which were purely for the drama. One moment that had Pinoys #shookt was the royal family, led by Helena Bonham Carter as Princess Margaret, poking fun at former Philippine first lady Imelda Marcos. And while there's no telling whether they really were dissing the controversial figure moments before Lady Diana (Emma Corin) was introduced to them, as it happened in the show, there is one shocking moment from the latest season that really, truly did happen: Lady Diana dancing to Billy Joel's "Uptown Girl" on stage in front of thousands of people (including her then husband, Prince Charles).

The almost-surreal performance played out in the ninth episode of The Crown. Fact is, the real Lady Diana really did dance to "Uptown Girl" with celebrated ballet dancer Wayne Sleep at the Royal Opera House in December 1985. We lay down what we know happened IRL versus what happened in the show.

Why did Lady Di want to dance on stage to "Uptown Girl"?

First things first, we reveal some plot points for the show up ahead! So if you haven't brushed up on your British royal family history notes, we suggest you be wary. The ninth episode of Season 4 is a major turning point for Charles and Diana's already rocky marriage. In the show, Diana sets up the little presentation with Sleep as a surprise birthday gift for her husband Charles. In real life, the short dance number was meant to be a Christmas surprise from Princess Diana to her husband during a holiday gala at the historic venue.

Sleep and Diana had been friends for a couple of years before the princess approached him with the idea, said the famed choreographer in an interview with Vulture. "She told me she got a recording of Billy Joel’s 'Uptown Girl' and she wanted it to be a surprise to her hubby for Christmas. She didn’t want him to know about it," Sleep said.

As for the song choice, Sleep supposed that it had to do with the sophisticated lady—a.k.a. the "uptown girl"— at the center of Billy Joel's official music video. "Diana knew she could play that role of sophistication."

How did they pull off the performance?

The show doesn't get into much detail regarding how Diana managed to sneak off for dance practice with Sleep, instead launching straight into Corrin as the princess excusing herself from hers and Charles' box seats—and promptly showing up on stage in a brilliant white dress dancing to Billy Joel.

As for the real-life surprise dance number, Sleep said they had practiced for weeks in secret beforehand with just one set rehearsal on the day of the performance. The results? "She couldn’t have danced it better. I was the nervous one! I was shaking in the wings. What if she doesn’t like it? What if I dropped the future queen of England?" Yup, that lift really did happen!

According to him, their dance was a bit more humorus than the show's take, with a bit of added elegance. They managed to work their height difference, him at 5'2", and Diana at 5'11", into the routine as a sort of dance competition.

Sleep had been sitting in the wings and signalled to Diana by raising his arms when it was time for them to prep backstage. Unfortunately, as this was smackdab in the '80s, there were no phones present—meaning zero video evidence for this crazy occurrence.

Diana had few fun moments in the fourth season—and the short joy viewers saw her have while dancing on stage wasn't exactly helped by Charles grimacing from his seat. And that tension-filled car ride back home as he berates her was just the bitter cherry on top of the dismal sundae.

Unfortunately, fictional Charles was right about one thing: Diana's performance made for perfect tabloid sensation IRL for weeks after. It didn't matter that there was no visual evidence available then, as the few pictures taken by the Royal Opera's official photographer only made their way to tabloids in 1995.

As for right after the performance, Sleep reports that Diana did introduce him to her husband at the party after the gala. "I’m going to keep my mouth closed on what it was like to be there. [Prince Charles] had a raised eyebrow, you might say. It didn’t go any further than that at the party," he told Vulture.

Royal expert Richard Kay said in documentary Princess Diana: The Woman Inside that the whole shebang was a "present that backfired," as quoted by The Independent. Charles, apparently, "wasn’t terribly impressed."

This Is What The Viral Rc Cola Commercial Means, According To The Creators