JUST IN: Jinkee Pacquiao Is One Glamorous Ninang at a Wedding Wearing Accessories Worth at Least P10 Million|Read more »
Culture | By Nicole Cruz - Sep 9, 2020 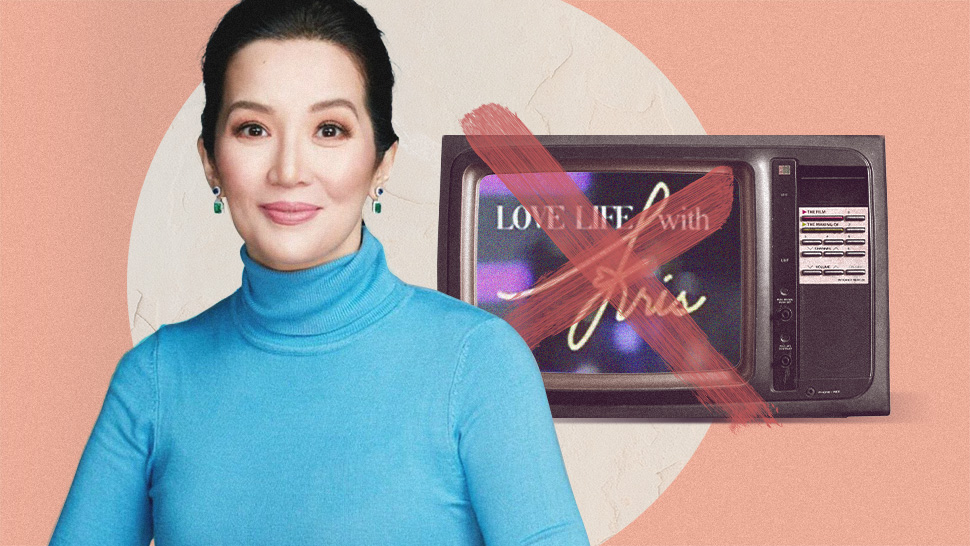 IMAGE Instagram/krisaquino, cornerstone
The "Queen of All Media" recently revealed the real reason behind the cancellation of her TV5 show.

Kris Aquino fans will have to wait (yet again) for her TV comeback. The 49-year-old media superstar finally confirmed the rumors that her TV5 show has been canceled. “Love Life with Kris,” as the show was called, was supposed to be her first TV appearance in four years. This much-awaited comeback, however, has been dogged with problems that led to its official termination. Here’s a timeline of what happened:

Kris posted feelers that a new project was in the works last June. On June 22, she announced that she had signed a contract but wasn’t allowed to reveal the details just yet. It was the “moment” she had been waiting for.

“I was reminded by attorney @gideon.pena that the contract I signed had 3 paragraphs regarding CONFIDENTIALITY. So for now it’s just this video,” she writes in the caption.

“THANK YOU to my FAMILY & all of you, my loyal FOLLOWERS for helping me pray for this moment to finally arrive,” she says.

Since then, Kris continued to post teasers of the show, which at that time, didn’t have a title yet. However, on July 4, Kris finally revealed what appeared to be a poster bearing the logo Love Life with Kris. The next day, she posted another teaser with the caption expressing her excitement, "There’s nothing better than giving yourself a new beginning..."

However, on July 6, news broke that the show had been canceled. According to Pep.ph, there was no “direct negotiation” between Kris Aquino and TV5. An independent producer had tapped Kris Aquino for the project. An insider source reveals that the decision to cancel the show came from the higher-ups of TV5, who said that Kris Aquino was a “business risk.”

Pep.ph also said that there had been talks of conflict between the show’s producer and TV5 executives, information that was revealed by entertainment editor Dondon Sermino on his YouTube channel.

Within a short amount of time, people noticed that Kris Aquino deactivated her Instagram account. Pep.ph was able to get an official statement from Kris regarding the rumored cancellation: "Let’s let this battle go. There are ones worth fighting, this isn’t one of them," she said.

The show was slated to air on July 25.

The show must go on

After weeks of silence from the media queen, an Instagram post finally emerged in the last week of July, which basically confirmed that she was, in fact, returning to television. The post, which excited her fans everywhere, showed Kris entering the TV5 studio in Mandaluyong City. She was there for a promotional shoot for Love Life with Kris.

She even showed a video of her meeting TV5 broadcaster Raffy Tulfo, who is the host of Idol in Action. "Hello! I'm a fan. It's a pleasure to meet the King of TV5," Kris said upon greeting Raffy. “You're on my wish list. Gusto ko magka-talk show with you. Sana mangyari. Sana in the future."

It appeared like the TV5 show was a done deal. Check out the video teaser below:

Postponed again, no word from Kris

After the buzz created by her exciting teasers, fans were disappointed yet again when news broke out in August that the show will be postponed to a later date due to the Modified Enhanced Quarantine, which was to end on August 18. However, according to Pep.ph, there was also word that there had been a falling-out between Kris and the show’s producers. The fact that it was ghost month might have been a contributing factor, too, Pep.ph reports.

However, there was also news that the show was terminated entirely. Manila Bulletin reports that TV5 executives said that Kris was “welcome” and that the ball was in her hands. At that point, there had been no word yet from Kris.

TV5 released official lineup of shows, but no signs of Kris

In the second week of August, TV5 held a virtual launch announcing the official lineup of shows. Many of these shows are top billed by Kapamilya and Kapuso stars. Shows included Chika, BESH! featuring Ria Atayde, Pauleen Luna, and Pokwang, and Fit for Life with Jessy Mendiola. There was no mention of Love Life with Kris whatsoever. According to Philstar, an insider source revealed that the show had been canceled again.

Now that it’s September (long past the slated release date of August 15), Kris Aquino finally quelled rumors by confirming that the show is, in fact, canceled. The actress/TV host revealed the truth through a “life update post” she wishes she didn’t have to make.

“My hoped-for TV comeback isn’t happening; the producer chose somebody else [whom] he and his sales team felt was more viable,” she explains. She did not mention who this chosen personality is.

Business aside, Kris also revealed that she and her son Bimby had tested negative for COVID-19, which she was grateful for given the fact that they were high-risk individuals. Both had been exposed to four people who tested positive for the virus.

“I would like to believe that I am now a glass half full type of person… I continue to have faith [that] there will be opportunities—all in God’s perfect timing,” she says alluding to her canceled show.

Kris’s popular TV show, Kris TV, last aired on April 15, 2016. She announced on September 12 that she was leaving ABS-CBN, her home network for 20 years. She has starred in a few movies since then, including I Love You, Hater and Crazy Rich Asians.