JUST IN: Jinkee Pacquiao Is One Glamorous Ninang at a Wedding Wearing Accessories Worth at Least P10 Million|Read more »
Culture | By Isha Valles - Aug 3, 2020 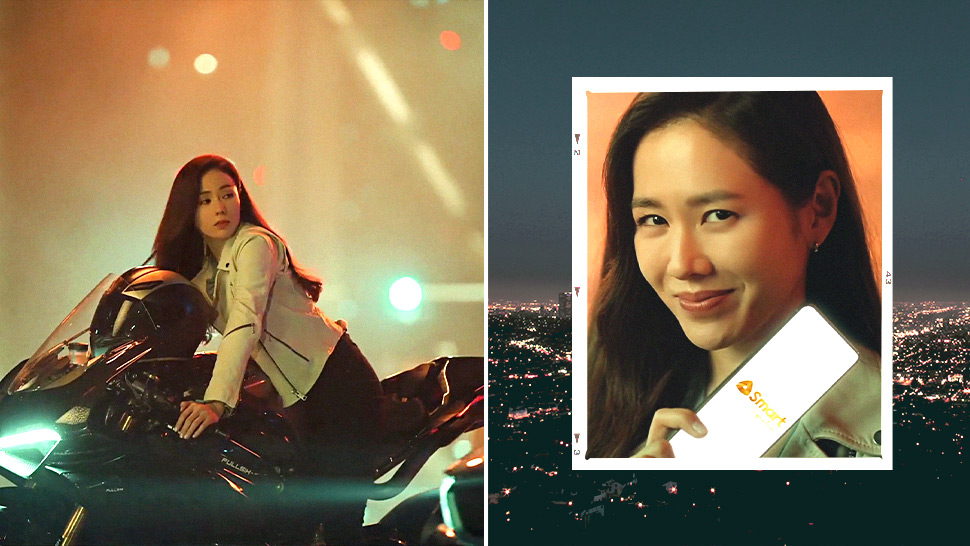 Three days and three teasers later, we can officially confirm that Son Ye Jin is Smart’s newest ambassador. In a press conference held this afternoon, the telecommunications provider aired the full video of their campaign with the Korean actress.

In the video, the multi-awarded actress talks (in English!) about the "Giga-life," narrating how Smart’s Signature Plan and its benefits make technology simple, allowing creatives like her to make their mark. Clad in the same motorcycle jacket, snug black pants and knee-high boots we saw in the teasers, she speeds through the city on a Ducati motorbike. The end alludes to Hyun Bin’s campaign as a black sports car pulls up beside her and a race through the streets ensues.

Trivia: Arrangements were made with Ye Jin’s camp right after Hyun Bin’s press con when clamor for her came up, and it was mentioned that the latter should not be kept lonely. Smart President and CEO Alfredo Panlilio describes her as very warm and professional. They shared that she really took the time to study her lines to make sure she could deliver everything in English.

Her year-long contract with Smart includes a visit to the Philippines and three events. It has yet to be determined when this will take place and if she and Hyun Bin will be coming at the same time.

Clad in the same motorcycle jacket, snug black pants and knee-high boots we saw in the teasers, Ye Jin speeds through the city on a motorbike with the same velocity and we presume the Smart network offers with its Signature Plan. Titled “The Signature Choice” (sound’s like Se-ri’s Choice from the drama, doesn’t it?), the campaign talks about how subscribing or upgrading to Smart’s premium postpaid plan gives you the benefit of higher quality and extended network coverage, bigger data inclusions, easy bills payment, and perks like availing of the top smartphones in the market and getting access to brand-sponsored events. They’ve also revealed that the Smart network is 5G ready for compatible devices.

A quick walk down memory lane, a little over two months to be exact, you’ll recall how Hyun Bin, a.k.a. Captain Ri, also zoomed through the city and into Smart’s campaign wearing a dark trench, black jeans, and boots. Similar theme, though he drove a sports car.

With this new endorsement, the Crash Landing on You (CLOY) lead stars we fell in love with late last year are somewhat reunited under the Smart umbrella. (How awesome would it be to see them together in one ad?) CLOY is the 6th highest-ranked K-drama in history, which tells the story of Captain Ri (Hyun Bin) and Yoon Se-ri (Son Ye Jin) Crash Landing on You is the 6th highest-ranked K-drama in history. It tells the love story of Captain Ri Jeong-hyeok (Hyun Bin), a North Korean military man, and Yoon Se-ri (Son Ye Jin), a South Korean heiress. The show was released last December and is currently streaming on Netflix.

Already a top Korean star, Son Ye Jin gained further popularity after starring in the drama. In June, she was named “The Most Beautiful Woman in the World” after topping a poll led by Starmometer—she garnered 4,354,037 votes out of the total of about 14 million that came in. A month later, it was reported that she would be starring in her first Hollywood film alongside Australian actor Sam Worthington.