DID YOU KNOW? The Perfume Hack to Make You Smell Good All Day|Read more »
Culture | By Ashley Martelino for Spot.ph - Feb 20, 2021

They're collaborating with Rags2Riches to provide artisans resources to build better lives! 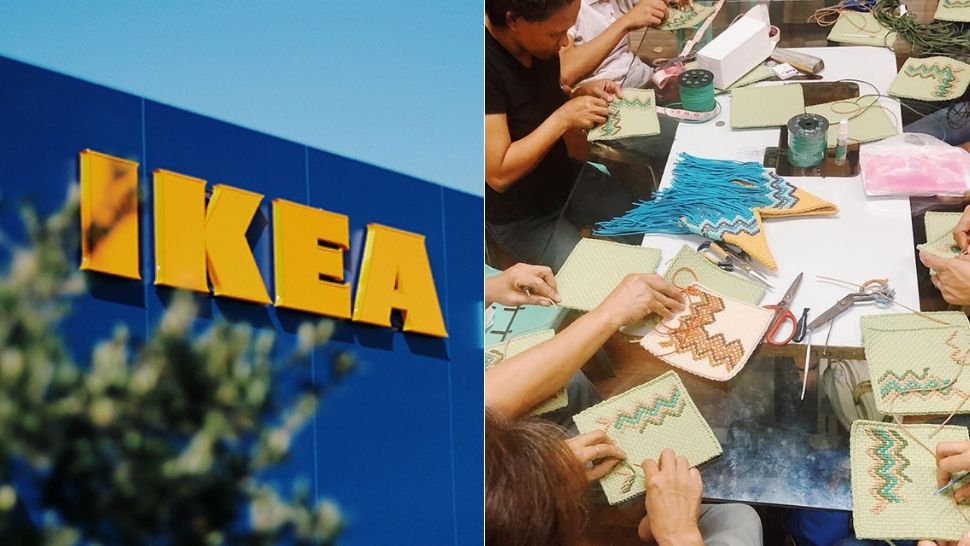 We're months away from the official opening of IKEA's first-ever store in the Philippines and there's a lot to look forward to, including the more than 9,000 home and life essentials you can shop, the in-house restaurant where you can order their famous meatballs, and the fact that the store will be the largest IKEA outpost in the entire world. Another thing you'll want to check out when you drop by the soon to open store is their fabric customization service. It was announced in March 2020 that IKEA partnered with local social enterprise Rags2Riches with the latter being the Swedish brand's official sewing partner in the country.

This means that Rags2Riches (R2R) will will have its own space in IKEA's outpost in Pasay City, where customers can have textiles customized. You can buy fabrics directly from IKEA and have them altered to your needs and liking right there in the store. Customization services include fabric sizing and personalization for curtains, pillow cases, bed sheets, robes, aprons, planters, poufs, ottomans, and other home essentials, notes R2R founder Reese Fernandez-Ruiz in a media roundtable. The customization service space inside the store can accommodate about three to five artisans at a time, though services can also be done off-site in R2R's workshops, she says, and assures that alteration prices will match the wallet-friendly pricing IKEA is know for worldwide.

All the fabrics you can find in the store are designed in Sweden. IKEA offers over a hundred different types of fabric, majority of which is made with cotton sourced from sustainable cotton farms in India with some fabrics being a mix of linen and cotton. Though the sewing service is not unique to the Philippines, market development manager Georg Platzer notes that it is executed differently by different local organizations throughout IKEA stores around the world. Fernandez-Ruiz says that the customization service in the Philippines will have a "Rag2Riches touch" by way of making the process more sustainable through upcycling of extra and off-cut textiles for the production of smaller items.

What we know so far IKEA Philippines and Rags2Riches:

IKEA's partnership with R2R, which began as early as 2016, is part of the Swedish furniture giant's worldwide corporate social responsibility agenda, which aims to assist in the global developmental goals to end poverty and enable people to have a better life. From its conception 13 years ago, R2R has been dedicated to just that, providing livelihood to communities in Payatas and other parts of the country. Fernandez-Ruiz shares that the enterprise has worked even throughout the quarantine to train their artisans and upscale their operations in preparation for IKEA's opening.

2. R2R was chosen largely because of their and IKEA's shared intentions to create a positive impact and "end the negative circle of poverty."

Platzer notes that R2R was chosen largely because of their and IKEA's shared intentions to create a positive impact and "end the negative circle of poverty." He says he is confident that the partnership will be one that is both long-term and sustainable, and hopes that the collaboration, as well as IKEA's other partnerships with non-government organizations and social enterprises throughout the world, would inspire other companies to work towards alleviating poverty and providing better job opportunities to their local communities.

3. The partnership brings many benefits for R2R's employees.

Rags2Riches aims to provide artisans, both men and women from local communities, the resources and livelihood they need to build better lives. Despite the limitations brought about by the COVID-19 pandemic, R2R has been able to keep livelihood going by providing Internet access and transportation through personal bikes to their employees, allowing them to hone and acquire new skills from home. Fernandez-Ruiz credits R2R's employees and artisans for their ability to adjust to the conditions and still learn new skills despite measures to maintain social distancing protocols. One of the enterprise's main goals, she says, is to help secure their workers have a more secure future, which is why all R2R employees are regularized with full benefits and tenure.

R2R community enterprise manager Cynthia Cabrera shares that she has worked with the social enterprise since its earliest days and expresses how excited her fellow community artisans and local weavers are to be working with a brand like IKEA. Though many had not heard of the brand at first, they were overwhelmed and even teary-eyed upon learning about its global reach and reputation. "'Yong saya, di mo mapaliwanag," she says. "Di namin inakala na aabot kami sa ganito." She even notes that as soon as R2R's artisans found out that the social enterprise would be teaming up with IKEA, many of them felt encouraged to train and learn more skills in order to be part of the collaboration. Cabrera says that her dream for R2R since the very beginning has been "globalization" and her main goal is to help artisans in communities in need. "Gusto ko makatulog sa kanila in any way," she says, adding that the workers are very grateful for the opportunities that the partnership has provided. "Maraming maraming salamat po sa trust."

4. Local artisans were trained by IKEA for the store's in-house customization services.

When is IKEA officially opening its doors so we can finally shop their world-famous products and try out their local customization services? No official opening date has been announced, but he notes that their goal of unveiling the store some time in the third or fourth quarter of the year remains. In a November interview, Platzer shared that IKEA's e-commerce store would be launching in July while the physical store will open nine weeks after. We're already counting down the days!

IKEA Is Opening Their Online Shop in the Philippines Soon and We Can't Wait!

8 Simple, White Pieces We Love from the IKEA 2021 Catalogue

10 IKEA Must-Haves You Can Shop in Manila Right Now