VISIT: Unplug from the City in This Cozy Family-Owned Farm in Batangas|Read more »
Culture | By Sofia de Aros - Oct 5, 2021

The designer, Domz Ramos, has officially issued a response. 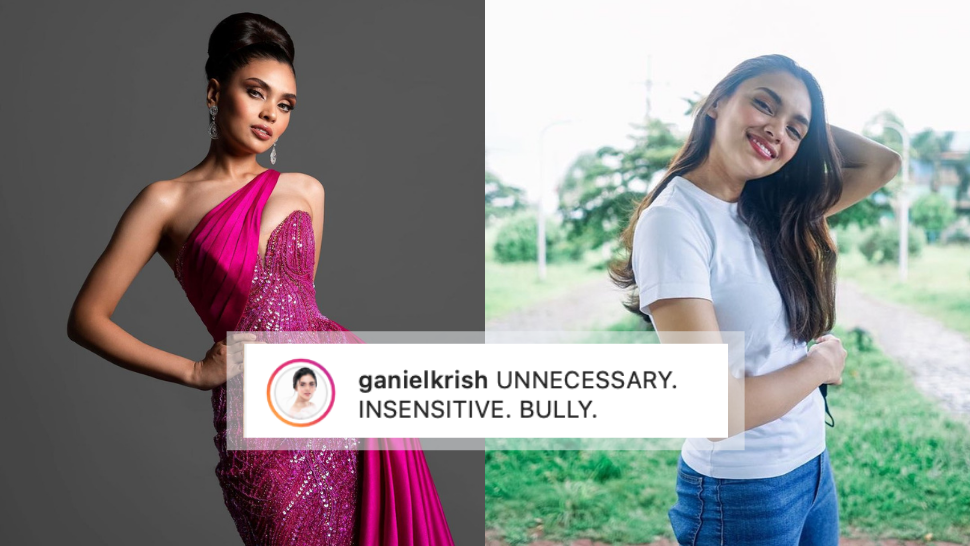 Beauty queen and ABS-CBN reporter Ganiel Krishnan called out a swimsuit designer for making fun of her placement in the Miss World Philippines 2021 pageant, which concluded on Sunday evening. Ganiel finished as the second runner-up, while Cebu City's Tracy Perez took home the crown.

In her Miss World Philippines screening video, Ganiel proudly proclaimed it was "Miss World or nothing" for her, projecting her win, as aspiring pageant titleholders often do. After she failed to bag the crown, Domz Ramos, who serves as the official swimsuit designer of Binibining Pilipinas, poked fun at her in a Facebook Messenger Story. "MISS WORLD OR NOTHING DAW EH OH AYAN 2ND RUNNER UP JIVAHHHH," he wrote.

Ganiel took to Instagram to repost a statement penned by one of her supporters who had come to her defense. She prefaced the post with her own words: "UNNECESSARY. INSENSITIVE. BULLY," she wrote.

"If there is one thing that was made clear after the recently concluded Miss World Philippines pageant is that Domz Ramos is a bully," read the post written by supporter Jerome Balute. "Even if he didn't mention Ganiel Krishnan 's name in his post, it was clear as day that he was throwing shade at the beauty queen, using her famed answer during the MWP screening "MWP or nothing" and even added her MWP placement. This is quite alarming because it has become a culture amongst pinoy pageant fans to bash and bully candidates without considering the trauma it might cause to the bullied. As the swimsuit provider of Binibining Pilipinas, it also stains the reputation of the organization because of his affiliation so I am hoping that he will be reprimanded or dropped because of his bullying ways."

"It's high time that we call out these people who find satisfaction over other people's heartbreak and misery. What bothers me most is that he doesn't even show remorse because this isn't the first time he bullied a candidate. It discredits the sacrifice and hardwork of the candidates and no one, regardless of his affiliation with any organization, has the right to invalidate the dream of any filipina by bullying," Jerome wrote.

Ganiel's fellow beauty queens expressed their support for her in the comments section.

"It has come to my attention that a post I uploaded after the Miss World Philippines pageant on October 4 is being passed around online and generating hate on my person," he wrote.

"First, I apologize to everyone who has been hurt by my remarks, especially Ms. Ganiel Krishnan, her pageant camp and fans, and indirectly, the Binibining Pilipinas organization. While I did not deny posting the statement, I would like to clarify that it was taken out of context."

"The statement in the screenshot read, 'Ms. World or nothing daw eh. Oh, ‘yan, 2nd Runner Up. Jivahhh.' What critics failed to share, however, was the post that followed, which read, 'But I think she deserves a crown. Oh jivah.' By itself, the initial comment could be construed as insensitive and my way of bashing Ms. Krishnan. Even as I agree that it might have appeared as such, I deny that it was meant to insult or abuse her. On the contrary, it was made out of my disappointment that she did not win a major title."

"My preference for Binibining Pilipinas over other national pageants is no secret anymore as I have been providing the swimsuits for BBP for years now (again, I apologize to the organization for having been dragged into this). Having been a fan of Ms. Ganiel ever since she won Mutya ng Pilipinas Asia Pacific International in 2016, I have long hoped that she would join BBP. I believe she would have easily won a crown, particularly Miss International. The statement I made in the now-viral screenshot came from this. It was not meant to put her down. It was simply my hopeful way of saying, 'Sana mag-BBP ka.'"

"Again, I apologize for my carelessness and beg for the forgiveness of those who have been hurt and offended, and pray that people would take my sentiment as a whole and not condemn me over this matter for one screenshot. This has been a humbling learning experience for me," he wrote.