From top actresses to beauty queens. 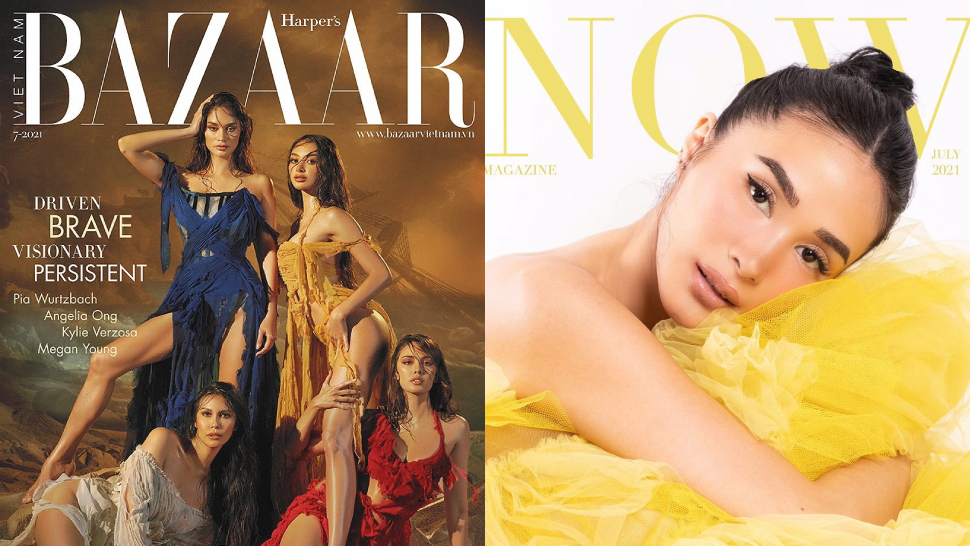 It’s always a treat to see our favorite celebrities on magazine covers. Glammed, dressed, and presented in a light seemingly larger than life, their photos also indicate the hottest trends of the month, from the most popular names in showbiz to the latest fashion collections in the country. Of course, with the stream of talent that we have, it won’t surprise you to hear that some of our brightest stars have gone beyond the folds of Philippine magazines, and have successfully traversed the front pages of other global titles as well.

Joining the queens for Bazaar Vietnam’s 10th anniversary cover blast is Alex Gonzaga. The famed comedian and YouTube vlogger spoke to the magazine about her role on the Netflix movie Love the Way You Lie, and her noontime show Lunch Out Loud.

In 2019, Singapore publication Buro launched their first print issue with Heart and six other Asian personalities fronting their debut magazine.

It seems Harper’s Bazaar Vietnam loves bringing in Filipinos for their anniversary issues. Before Alex and the beauty queens was Anne Curtis-Smith, who appeared on one of their multiple covers to celebrate their seventh year in the industry, back in 2018. Anne was joined by other international sensations such as Jessie J, Tiffany Young, and Shay Mitchell.

After appearing on the cover of XPEDITION last 2019, the actress and model once again fronted the Dubai-based title this 2021 for their Spring Summer issue. FYI, Maymay is known as the first Filipina to have walked the runway at Arab Fashion Week 2018, stunning UAE locals with her head-turning strut.

Speaking of XPEDITION, Alden Richards made history in 2019 as the magazine’s first-ever male cover. The title touted Alden as a modern king, fresh off of his success as a multimedia superstar who also broke box-office records that year for his film with Kathryn Bernardo, Hello, Love, Goodbye.

London-based travel magazine Suitcase got actress Janine Gutierrez to grace the cover of their June 2015 Water Issue. In the question and answer portion for the spread, Janine talked about her favorite Pinoy street food, one thing foreigners don’t know about the country, and her favorite thing about the Philippines.

After Catriona Gray was crowned Miss Universe in 2018, she’s since starred on a number of international magazine covers, including Haper’s Bazaar Vietnam, Colombia’s La Revista Actual, and Dubai’s XPEDITION. Although not a cover, the beauty queen was also notably interviewed by fashion icon Tyra Banks for a feature on V Magazine.

Another Harper’s Bazaar alum is model Hannah Locsin. The Pinay beauty served as a digital cover on the franchise’s Kazakhstan mag for the month of March last year.

Meet The Filipino Socialites Who Made It To International Headlines