JUST IN: Jinkee Pacquiao Is One Glamorous Ninang at a Wedding Wearing Accessories Worth at Least P10 Million|Read more »
Culture | By Em Enriquez - May 13, 2022 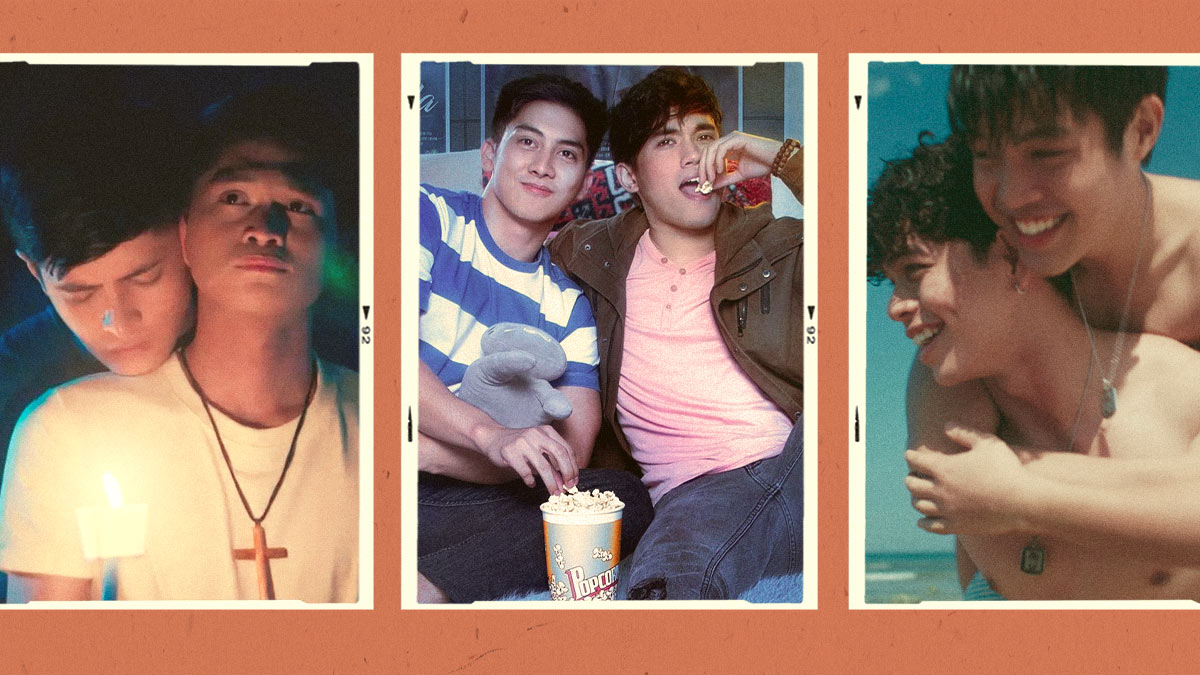 IMAGE Love Beneath the Stars/Dreamscape Entertainment, Gaya Sa Pelikula/Globe Studios, Gameboys/IdeaFirst Company
One of these shows was nominated for an Emmy!

We're pretty sure you've been noticing the spate of boys' love series popping up everywhere over the past couple of years. And with good reason! The genre proves to be the intersection of relatable coming-of-age narratives, youthful romantic comedies, and contemporary queer stories.

Here in the Philippines, we've got a handful we can conveniently tune into online. Below, we round up seven of our top recommendations for anyone needing a pinoy BL marathon.

Here are 7 Pinoy BL series you have to watch:

Set at the onset of the COVID-19 pandemic, this webdrama centers on Cai (Elijah Canlas), a budding video game streamer. One day, he gets beaten in a match by a fan named Gav (Kokoy de Santos), who actually just used the game as a means to ask him out. While he's hesistant at first, Cai gives in and lets the charming Gav into his world.

The series gained fans from all over the globe, and it even got an International Emmy nomination! A follow-up film exploring "GavReel's" ventures under one roof was released a year after the first season. While it's yet to premiere, a second season has already been teased, further showing the development of their relationship.

Read our review of Gameboys: The Movie here:

Mico (JC Alcantara) is a precautious college freshman whose life has always been about getting good grades and focusing on his future. That is, until he gets partnered with their school's biggest jock, Xavier (Tony Labrusca). The two eventually get along; so much so that some surprising feelings start to arise.

Soon after the first season concluded, a movie depicting how XavMi's relationship developed (or didn't) was released.

After admitting their feelings for one another (in the precursor film The Boy Foretold by the Stars), Dominic (Adrian Lindayag) and Luke (Keann Johnson) have to figure out how to make their young romance work despite the disapproval of their friends, family, and school. They soon discover that no coin toss or deck of cards can decide what will happen to their relationship.

Read our review of the series here:

Ben (Teejay Marquez) and Jim (Jerome Ponce) were childhood chums who got to reconnect during the pandemic. Ben, in particular, is conflicted about letting Jim know how he really feels about him.

In the second season, retitled Ben X Jim Forever, things get more complicated when Ben suddenly disappears and Jim has to band together with their friends to find him.

Read our review of both seasons 1 and 2 here:

Architecture student Karl (Paolo Pangilinan) moves into his own place and meets Vlad (Ian Pangilinan), a film major and his aloof yet secretly affectionate neighbor. Living in close proximity to one another triggers something unexpected between the two, but Karl is wary about letting his feelings for Vlad flourish.

An introverted Mando (Kokoy De Santos) finds himself falling for Barry (Alex Diaz), their school's out-and-proud star athlete. Unfortunately, Barry's off the market, so Mando takes his chances at dating Krisha (Barbie Imperial) instead. Along the way, he gets caught in between the two, and discovers how uncannily intertwined the three of their lives are.

Sky (Miko Gallardo) has big dreams of making it big in the culinary industry. He interns at a multi-billion dollar food company under the supervision of Ace (Inaki Torres), his boss who was born with a silver spoon in his mouth. A possible romance simmers between the two after Sky slowly thaws Ace's frigid facade.