LOOK: Julia Barretto Is Ready for Mature Roles, Which Means Living Life on Her Own Terms|Read more »
Culture | By Jam Nitura - May 5, 2020

They put off their honeymoon in favor of serving in the frontlines. 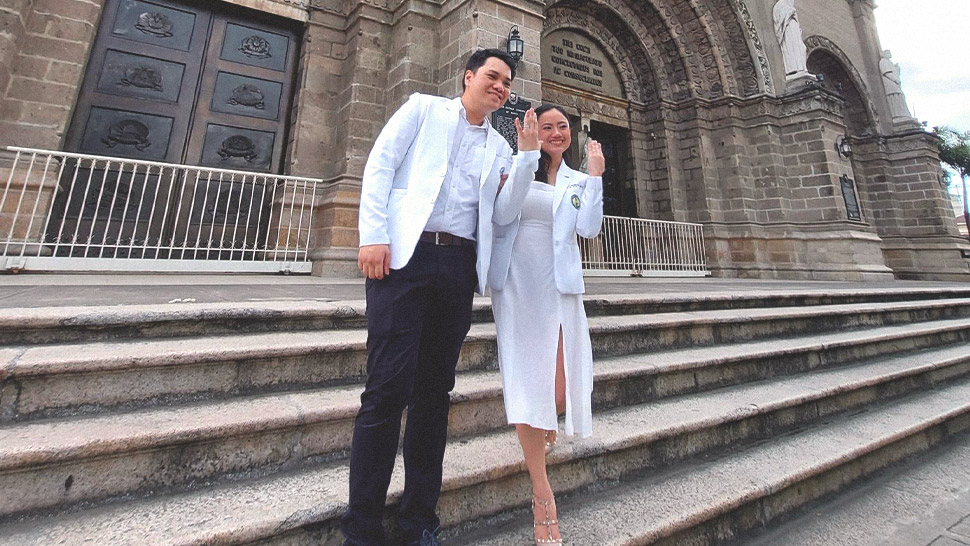 IMAGE Courtesy of Dianne Ruedas
They put off their honeymoon in favor of serving in the frontlines.
Shares
Share
Tweet

With a seemingly endless battle awaiting them outside, two doctors took a much needed day off to say "I do." Dianne Ruedas and Paolo Bueno, an obstetrics-gynecology resident and a pediatric resident, respectively, who are both aiding in the frontlines, recently tied the knot in the Manila Cathedral as its hallowed halls embraced their vows and blessed the two doctors before they jumped straight back to their posts the next day.

Having been together for two years and engaged for one, Dianne and Paolo were just one of many couples who’ve had to hit pause on their original wedding plans due to the pandemic. In an interview with Preview, Dianne revealed that their nuptials had been slated for May 17 with a reception in Manila Hotel supposedly already set in stone for their special day. “Everything was already planned and polished, but due to the pandemic, we have no choice but to postpone it for the safety of our guests and because of our busy schedules as frontliners in this battle,” Dianne says.

When asked why she and her now-husband pushed through with their wedding, Dianne tells us “I knew in my heart that he was the one and we realized that we don’t need an extravagant wedding to celebrate our love. We just needed God’s blessing and grace especially now in these trying times.”

As forced by circumstance these days, their church wedding was an intimate 45-minute affair attended only by a handful of people to ensure social distancing measures. The small party included two fellow doctors, Dianne’s cousin and Paolo’s brother. “We contacted the Secretary of Manila Cathedral. Luckily, they allowed us to push through but of course with certain protocols due to the situation,” recalls the bride.

Meanwhile, instead of a bespoke suit and a grand bridal gown, the couple chose to don standard white coat blazers with their hospital’s seal over their simple outfits—for Dianne, a modest mid-length dress; and for Paolo, a button-down and a pair of black trousers. A reminder, perhaps, of the world they have to return to.

A true power couple, Dianne and Paolo returned to the frontlines the day after, now husband and wife. Their honeymoon can wait, along with their dream wedding once the pandemic subsides.

5 Celebrity Weddings to Pin on Your Wedding Board