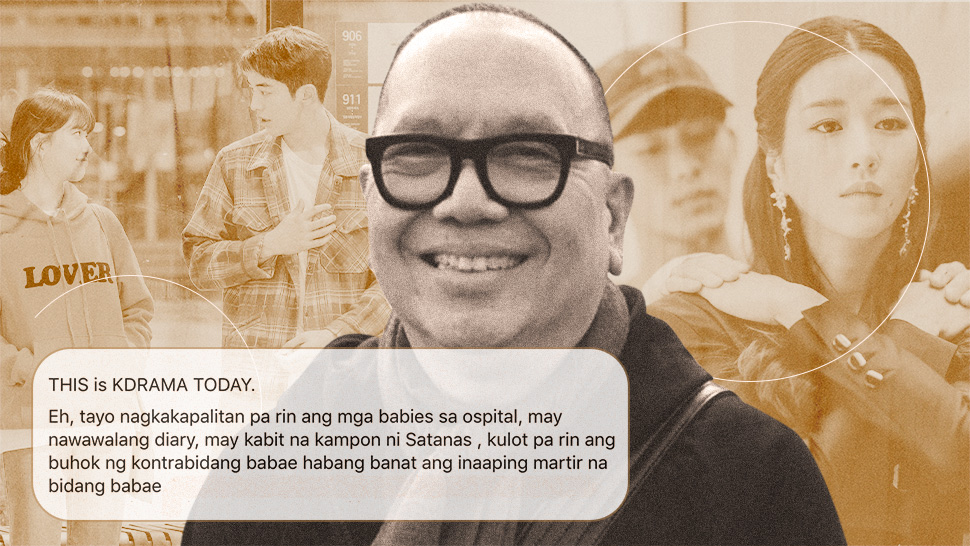 No one can deny that K-drama fever has reached an all-time high, especially over the quarantine period when Filipino fans, both new and old, needed a respite from reality. One fan who strongly believes that Korean dramas offer more than just short-term entertainment is Filipino director Jose Javier Reyes, whose Facebook post last night—which offers his own analogy on K-dramas versus Filipino teleseryes—has since gone viral.

The local film industry expert, fondly referred to as Direk Joey, expressed his admiration for the high caliber that Korean dramas champion in the small screen, specifically citing shows like Start-Up, It’s Okay to Not Be Okay, Life, Sky Castle, Itaewon Class, and Record of Youth as his prime examples.

"START UP is about setting up businesses. IT'S OK NOT TO BE OK is about mental health. LIFE is about health care and business. ITAEWON CLASS is about dignity in ambition. SKY CASTLE is about parents and education. RECORD OF YOUTH is about choices in life and the sacrifices you make," the director wrote on his Facebook page. "THIS is KDRAMA TODAY."

In contrast, Direk Joey also couldn’t help but mention how our local TV industry trails behind when it comes to offering the Filipino audience high-quality viewing experience, noting how our teleseryes are still stuck with the same old predictable and formulaic plots that we keep recycling over the years.

Netizens and fellow K-drama fans happily chimed in and gave their own two cents on the matter, a lot of them also expressing their love for Korean dramas and admiration for how they’re thoroughly executed. One of the top comments read, “What I've also realized in this K-drama phenomenon (on top of the amazing breadth of topics and well thought out narrative devices) is that they take time to also build very interesting sub plots revolving supporting characters that we also root for!”

In the same comment thread, other users echoed the director’s sentiment on our local TV industry’s need to evolve and raise the bar when it comes to setting the standards for our own Filipino teleseryes. One commenter wrote, “High time to venture outside the box. Tendency is to stick to formula that has worked for hundreds of years. Takot mag experiment!”

Meanwhile, some users clamored for the Filipino director to step up to the plate and promulgate the necessary changes in the local TV industry.

This actually isn’t the first time the director trended on social media after expressing his own opinion on Korean dramas. In April 2020, Direk Joey’s blog post went viral and garnered a thumbs up from the netizens as he listed down the reasons why Filipinos are obsessed with Koreanovelas. This happened on the heels of another Filipino director Erik Matti being criticized for calling K-dramas “faux Cinderella stories with Belofied actors whiter than white.”

These Youtube Channels Will Help You Learn Korean For Free!