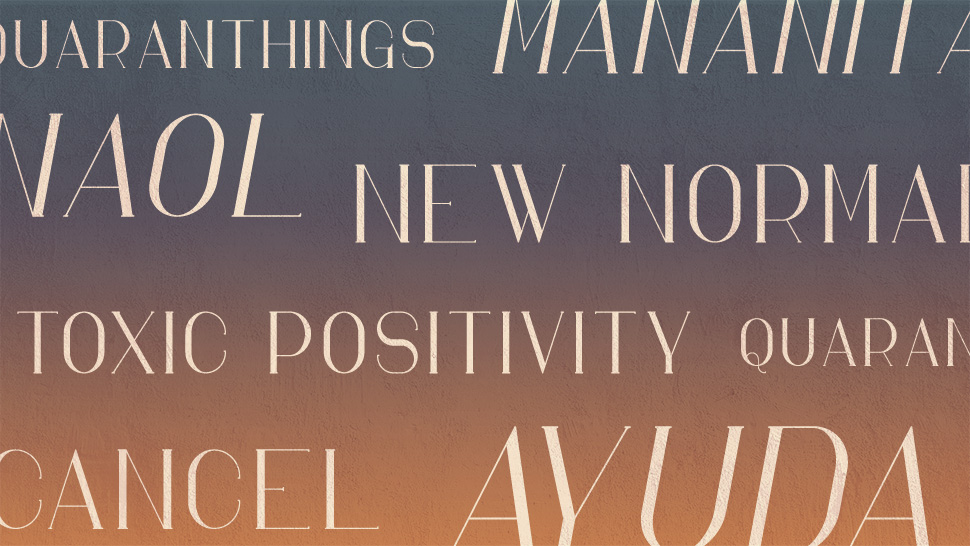 In one word, what defines 2020? For lexicographers at Collins Dictionary, lockdown is word of the year. For Merriam-Webster, this year was all about the pandemic.

The new generation experienced a year like no other, probably the strangest in their lifetime yet. Forced to stay at home, Gen Z had to stand by and watch as adults took charge of fixing the mess that is the corana virus health crisis.

What did they see? Summit Media’s news website Reportr.world asked around and came up with a shortlist.

Countries all over the world experienced a string of lockdowns this year, the first defense against the pandemic in the absence of a vaccine. With the Philippines' distinction of having the longest lockdown, many Gen Zs said that like Collins Dictionary, the word lockdown pretty much summed 2020 up for them.

Borrowed from the Spanish languge, ayuda is Filipino word for aid. In English, it has a variety of meanings: help, assistance, and support, which can come in many forms.

This year, ayuda came in bags usually filled with rice, canned goods, and instant noodles. Ideally, it is the  government who should be providing them. But this year, many could not help but point out the private sector's efforts. "Ayuda is something that was denied to us by the ones expected to extend it but was surprisingly fostered by many of us who have almost nothing in the hardest of times," said Twitter user @nayrbfwe.

Early on in the pandemic, we were already talking about the "new normal." The realization that COVID will completely change life as we know it was brought forth by this term. If the goal is to return to as much normalcy as possible, it was the youth who dared to ask: what do we really mean by normal?"

There should be nothing normal about continuing the same underfunded healthcare system, the tokenistic culture of celebration for healthcare workers and service industry workers, and the disruption and destruction of ecosystems," said young educator Albert Pagunsan.

If you spent a good amount of time online this year, most likely you've seen a social media post of a friend's quarantine life update with the caption: "Just quaranthings".

It's the term young people often used to refer to the things they did during quarantine, from making dalgona coffee to TikTok challenges.

The COVID-19 pandemic changed the way we work. As soon as lockdowns were implemented, bulk of the work force was forced to shift to a work from home setup which was considered unthinkable before.

It is the “new normal" for companies and employees worldwide. For first time employees including members of the COVID Class of 2020, this is the only "normal" they're accustomed to.

A webinar is simply a seminar conducted over the internet. It is something that has long been done, but not as much as we all did in 2020. As soon as the lockdowns started, seminars had to pandemic-proof themselves, thus shifting online so that ideas-sharing could continue.

When asked how many webinars he went to this year, 22 year-old Emil Panlileo said, "let me rephrase the question, how many webinars did I go to, organized, let pass, and forgot to go in total? Answer is: around 60 to 70."

Deep into the lockdown, a police official's birthday celebration incited public outrage and brought to the general public's vocabulary the word mañanita or birthday breakfast.

The celebrant was then-National Capital Region Police Office chief Major Gen. Debold Sinas who, despite being the backlash was named chief of the Philippine National Police in November.

Ah, how we both love and hate this word thanks to Shopee and Lazada. Every month, these two along with other online shopping platforms invite us to splurge in the event of their online sales. Aside from the necessity of buying essentials, online shopping became a means of relieving stress due to the pandemic.

Intimacy is the pandemic's mortal enemy. Given a deadly virus that spreads through physical contact, social events either had to take a backseat this year or go digital.

Behold, everyone's favorite escape in 2020. TikTok became even more popular this year as millions cooped up in their homes turned to the platform for entertainment.

For young people especially, TikTok became a potent tool for self-expression. The year 2020 saw the rise of TikTok personalities such as Yanyan de Jesus, Nava Rose, and Fynest China who graced Preview’s May 2020 cover.

For 22-year old Pam Rodriguez, TikTok became her escape from the country's situation as it allowed her to "live vicariously" through foreign content creators from countries with impressive pandemic response.

As the country faced crisis after crisis, 2020 became the year many just wanted to cancel altogether. Of course, life doesn't work that way and we still toughened up (but not without comparing it to Netflix sci-fi hit Black Mirror).

Apart from canceling this year, cancelling people also became a thing. "Cancel culture" became a subject of online discussions, as the increased online activity, mostly on Twitter, brought out the worst in people.

While it's completely normal to feel resigned over this year and just hope for it to end, there were still those who chose to see 2020 in a positive light. For former Ateneo Blue Eagles captain Mike Nieto, 2020 was a window of "opportunity" for him, as the idle time gave him space to focus and work on himself as he prepares for his future as an athlete.

Kapoy may be Bisaya word for "tired" but it's become widely used even by non-Bisaya speakers. Fatigue became a universal feeling this year, a feeling that wasn't at all limited to our physical state. It also referred to fatigue over countless Zoom sessions (zoom fatigue) or the aversion we developed to anything COVID-related (COVID fatigue).

For 22-year old Rhys Dumalagan, kapoy is her year-round sentiment, particularly due to the government. "We’re always waiting for the government to work on its sense of urgency. They always keep our hopes up but nothing really happens. Kapagod maghintay samantalang other countries kaya na mag face-to-face," she said.

Grief is probably the most common feeling we felt this year, regardless if the loss you experienced was for a person or not.  We experienced so many losses this year—lives, jobs, and the old normal.

"I feel like present circumstances made grief so communal to everyone as opposed to literal loss we're used to experienceing," said Issa Canlas, a student from UP Diliman. "Also there's grief over how things have changed so much? Napaka-meta nito but I honestly feel like I'm also mourning my old self because of how much I changed this year," she said.

When a series of typhoons inundated communities in late 2020, voices online called out government officials for once again taking advantage of Filipino resiliency. This act of toxic positivity is problematic and must no longer be glorified, they said.

According to Twitter user @makidlr, positivity is okay as it allows us to make use of courage in every situation, but "it's important that we learn to draw boundaries between which positivity is right for every setback." In the case of those struck by disasters this year, moving forward should be met with seeking accountability.

Naol is short for sana all a Filipino term which means "“I hope everyone experiences that”, according to the Urban Dictionary. It's a fairly new phrase that came up in recent years, but this year, Filipinos made heavy use of the word as the pandemic highlighted many inequalities.

Pandemic is Merriam-Webster's word of the year, but for the young people joking online, it should have been the full phrase: "amid the pandemic." How many times did you see that line written this year?

The year 2020 is definitely one of the books for holding the record of putting us through so much shit. As if there weren't enough curse-worthy events happening already to us collectively, one said she got retrenched from her job and her boyfriend's life at the same time.

Well, this really was a year that needed a lot of explaining. The world searched "why" more than ever, Google said so in their year-ender video:

Reportr was also born this year to explain the news to you. For fresh graduate Maget Igcasan, the word became more of an existensial question: "Why are these things happening in my time?"

Cancel 2020 is something we often heard young people say this year, but if you're reading this, one way or another, somehow you made it through and survived. Back in January, popular Netflix show BoJack Horseman ended its six-season run with this lesson: “Sometimes life's a bitch and then you keep living.” It sums up what survival means in a year fraught with crises and disasters.

"People have no other choice but to survive on whatever they have," said fresh graduate Gertie Farenas, who chose 'survival' as her word of the year. Months after graduating, she is still trying to find a job in order to help her family. She also wants to "contribute as a citizen" in taxes or in donations to private entities, having witnessed how many Filipinos this year needed relief.

But surviving 2020 is only a prelude to something bigger, she said. What comes next? Voting, according to Farenas.

"People should realize by now that they have the power to change the course of things in government," she said.

5 Filipino Fashion Tiktokers to Follow for Style Inspiration This 2021

These Are the Highest-Paid YouTubers of 2020, According to Forbes

How Your Favorite Celebs Celebrated New Year's Eve and Welcomed 2021

10 Adorable Celebrity Babies Who Were Born In 2020