10 Coming-of-Age Movies You Need to Watch on Netflix

These are stories we can all relate to one way or another. 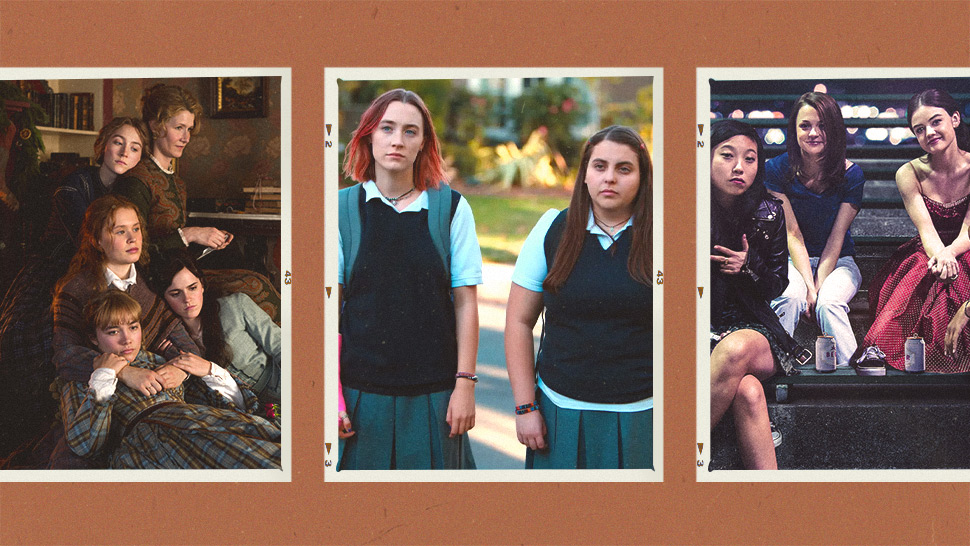 IMAGE Little Women/Sony Pictures, Lady Bird/A24, Dude/Netflix
These are stories we can all relate to one way or another.
Shares
Share
Tweet
Comments

Whether you’re about to start forging your own path in the world or reminiscing on how far you’ve come, coming of age stories resonate with everyone. There’s something special about seeing characters on screen blossom into more fully-realized and well-rounded people meanwhile inspiring us to be better or reminding us of who we were when we started out. Always fun, mostly hilarious, and occasionally heartbreaking—here are some of the best coming of age stories you can watch on Netflix right now.

Strong-willed and opinionated highschool senior Christine McPherson—a.k.a Lady Bird—longs to break free from her hometown Sacramento, as well as from her financially struggling family and equally strong-willed mother. This movie perfectly encapsulates the search for one’s identity along with the ever so complicated relationship between mothers and daughters.

Ellie Chu lives a quiet, friendless life in her small town, writing homework assignments for her classmates to support her family. Things change for Ellie when high school jock Paul asks her to help him write love letters to Aster Flores, the girl that Ellie is secretly in love with. The Half of It is a beautiful, subtle movie that portrays platonic, romantic, and familial love without making one more important than the other.

Charlie has spent his whole life as a wallflower, but when he meets two free-spirited seniors, Sam and Patrick, he learns how to start living life to the fullest. While this movie explores the joys of first loves and finding true friendship, it also seamlessly covers more mature themes such as trauma, abuse, and mental health.

All The Bright Places follows Finch and Violet. These two teens are struggling with mental health issues and scars from the past, while striving to inspire each other to live. Equal parts heartwarming and heartbreaking, All The Bright Places is a film you shouldn’t miss.

Dude is about four female best friends during their last two weeks of high school learning how to deal with major life changes and inevitably growing apart.

Tom is a hopeless romantic. Summer doesn’t believe in love. After being dumped, Tom reflects on their relationship together, and in the process, learns a thing or two about himself. This one goes out to those of us who underwent major personal growth post break up.

When Scott Pilgrim falls for Ramona Flowers, he didn’t expect to fight seven evil exes just in order to be with her. This flick explores growing up and being emotionally mature in relationships in a hilarious and action-packed way.

Vada is dealing with her dad re-entering th dating scene, a hopeless crush on her English teacher, and everyone but her best friend Thomas is thinking she’s a freak. Unlike the other films on this list, this one focuses on childhood.

Craig, a stressed out and depressed teenager, checks into a mental health clinic and finds a mentor in Bobby and a possible love interest in Noelle. This movie is all about finding clarity and sanity even through the most insane places.

The latest adaptation of the timeless novel follows the four March sisters: Amy, Jo, Beth, and Meg, from their childhood into womanhood, covering all the ups and downs. Every girl will be able to see themselves in at least one of the sisters.

Sm Mall Of Asia Will Be Opening A Drive-in Cinema

Mark Your Calendars: Here Are All The Huge 9.9 Sales You Shouldn't Dare Miss