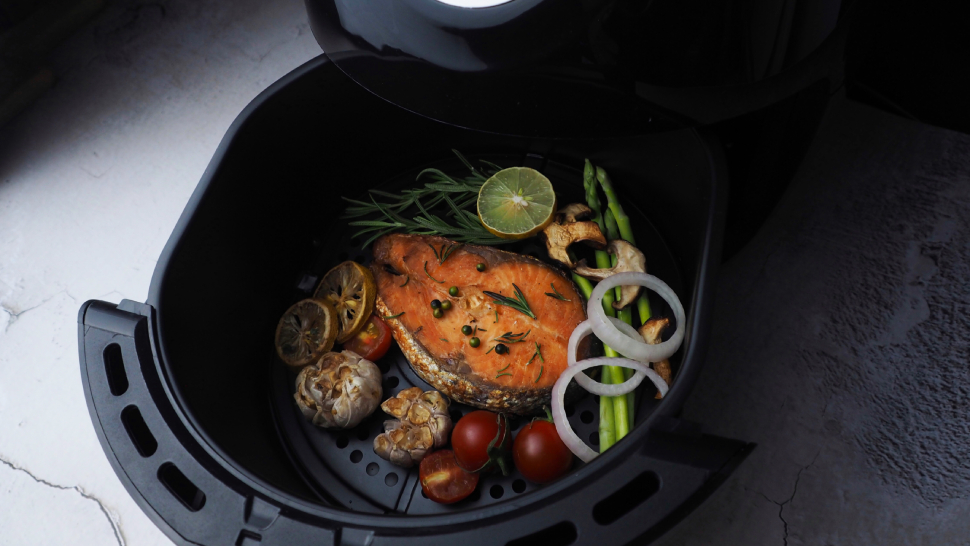 IMAGE shutterstock.com
How you cook the food is as important as what you cook.
Shares
Share
Tweet
Comments

Cooking in an air fryer might not be as healthy as you think it may be.

A report from the Consumer Council of Hong Kong issued last February 17 cautioned users of air fryers about cooking at high temperatures above 120 degrees C because of acrylamide, a chemical that is "probably carcinogenic to humans".

Do you own an air fryer? Here's what you need to know about acrylamide and how to cook in it more safely.

Acrylamide is a chemical that is created when there is a "natural chemical reaction between sugars and asparagine, an amino acid, in plant-based foods".

What causes acrylamide to develop in food?

The report stated that it tested 12 air fryer models for safety and performance. The council in the report said that frozen French fries cooked in the air fryers, when tested, registered high amounts of acrylamide when cooked at the recommended factory settings. These recommended temperatures are all above 120 degrees C or 250 degrees F. It stated a reminder for consumers to be mindful of these findings.

These findings, however, are not new.

According to the US Food and Drug Administration about acrylamide, the presence of acrylamide in food is not new. In fact, it stated that it has always been present in cooked food but was only discovered and detected in certain kinds of food in 2002. The most common kind of food that develops acrylamide is food mainly made from plants. These include food products commonly made from potatoes, grain, and coffee.

The kinds of food in the first initial set of tests that detected acrylamide that ran from 2002 through 2015 included:

It was noted in the study that during the range of the study, not all products were found to have high levels of acrylamide, and some even indicated "significant decreases" in the chemical from the first initial testing of the food to the latest tests. The study suggests that the companies might be implementing strategies to decrease the creation of this chemical in its food products.

We tested the air fryer at the 120 degree C setting as recommended by the report using frozen potato wedges. The potato wedges were placed in a single layer in the basket and air fried for 15 minutes at the recommended temperature.

This resulted in fries that were cooked through but lacked the crispy texture that one expects in fried food. It also resulted in food that was not very hot, the fries cooled down quickly, and thus, the fries tasted dry quicker.

If you're worried about cooking meat to safe temperatures in your air fryer, don't fret. You can. The drawback is that it becomes a much longer process than you think. However, cooking at this temperature may take hours instead of just one, especially since meat needs to reach the new minimum internal temperatures of meat for food safety of at least 63 degrees C or 145 degrees F.

Cooking at such a low temperature is slow roasting at its best and is also known as the low-temperature, long-time cooking method. According to the editors of Fine Cooking, cooking at low temperatures results in meat that cooks more evenly from the inside out, with minimum shrinkage. It even improves juiciness and allows the tough strands to tenderize in time.

Air frying is being deemed or seen as "healthier" cooking. However, this claim may become invalid if the food being cooked is not healthy or prepared in a healthier manner. Food is still being "fried", so while using less oil is believed to be "healthier", one should also take into account the kind of food being cooked.

So, if you're cooking using your air fryer, one should also be mindful of what one is cooking as well as how it's cooked to enjoy the benefits of a healthier lifestyle.

These Metallic Air Fryers Will Instantly Upgrade Your Kitchen Aesthetic