Why a Piercing, Not a Tattoo, is the True Test of Commitment 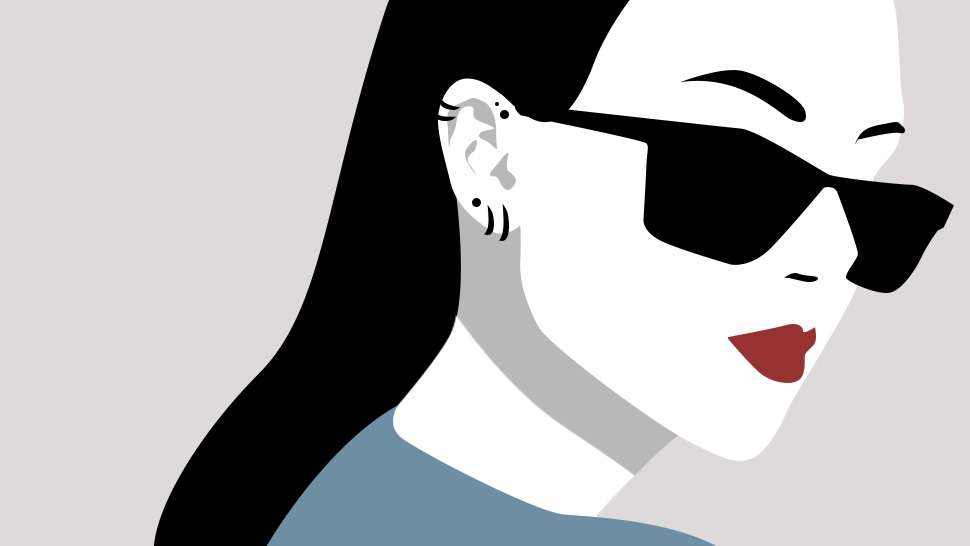 ILLUSTRATOR Gab Gutierrez
And other thoughts on body adornment.

My recent foray back into the realm of piercings started a few years back, just as piercings started popping up on runways. The models at Givenchy's 2012 Haute Couture show were heavily adorned with colossal dangling earrings and septum rings, a look that catapulted the bovine-esque nose piercing into the spotlight. But I paid this no heed, as I was neither interested in a nose ring or any body modification at the time. That is, until Instagram decided to throw me a curveball while I was gathering jewelry pegs. There, in its minimally adorned glory, was a picture of an ear pierced in a place I've never seen before.

It looked simple enough, a tri-dot stud adorning a pierced tragus (that's the piece of cartilage attached to your face,) and yet there was something totally appealing about its strange placement. It didn't scream biker gang or any other stereotypical impression piercings tend to give people. It looked, well, chic.

More digging led to pictures of ears with multiple piercings, and with each new picture I learned three new things: The first is that the realm of ear piercings is way bigger than that double or triple lobe piercing your high school classmates were toting around back in the day. Second, is that the ear can be decorated in a multitude of ways. From subtle hoops, tiny studs, and thin chains, the new breed of adornment is all about that delicate look. And, the third, is that the trend actually has a name: constellation piercings, a group of three or more piercings grouped to resemble a smattering of stars.

After that I was obsessed, I started researching on everything from piercing placement to aftercare and everything else in between. I had mapped out both my ears, and by then all I had to do was pick the first place to pierce, give it a month to heal, and get a new one until I completed my constellation.

I showed up one morning at a tattoo parlor, eager and ready for new body jewelry. In one not-so-swift motion (no, I do not recommend you guys going to the same piercer,) it was done and I was walking out of the shop in a haze, still high off the adrenaline rush from the needle that just entered my tragus. Every time I looked into the mirror that day, a frisson of excitement shook my body over the little stud in my ear. Little did I know my excitement would be short lived.

When nightfall came and it was time to clean my piercing, I felt prepared. I readied my assortment of warm salt water solution, cotton buds, and cue tips, took a deep breath, and proceeded to clean the wound. After the ordeal was done, I felt a little let down. "Well, that wasn't as exciting as the internet said it was going to be," I said before hitting the sack, dreaming of my next piercing. I awoke the next day and immediately inspected my ear. The area was bruised and swollen, but I readied my cleaning arsenal and got to work, cleaning it the same way as I did the night before.

My cleaning routine slipped into my daily habits without a hitch, and I was cleaning it three times a day during the first week of healing. In this week I experienced feeling really run down (from my body trying to heal itself,) a lot of swelling (of the pierced area and on the lymph nodes on one side of my neck,) pain (from accidental contact,) and a few panic attacks (caused by relentless Google searches of infected ears). By the second week my piercing had mellowed out and I hardly remembered I had it, except for cleaning time, of course. But by the third week, I was over it.

The novelty had worn off, as with all new things, and I was beginning to get restless. I grew tired of seeing a plain metal stud, a clear giveaway that I was a piercing newbie, and I yearned for a chance to decorate my new accessory holder with a more sophisticated piece. I started telling myself that it was time to get pierced again and get a head start on the healing process, so I could wear more accessories and finally complete my constellation. The thought process was eerily similar to when I got my first tattoo, when all I could think of when the pain wore off was getting more ink.

You see, what people don't get about piercings is that they require much more patience than they advertise. A tattoo heals within a week or two, and then you're left with the final result. But a piercing takes months to heal, with pierced cartilage taking about the longest (8 months to a year). So you see, a piercing takes serious dedication. So serious, that it could even potentially cut off one of your body's energy points permanently.

Okay, calm down, I know it sounds like I just spouted some serious sounding mumbo jumbo, but for those who believe in the power of acupuncture, ear piercings are dangerous territory. The ear is home to dozens of acupuncture points, each a channel you can activate with a needle to help with your specific cause. (The tragus, for example, is home to a point that activates the larynx and pharynx, and the main reason why the lymph nodes on my neck were swollen post-piercing.) After showing my new earring to my acupuncturist, he said that I had just rendered that point useless, and that there was a certain imbalance at play. He explained that by touching a point, you stimulate its energy as long as the touch is sustained. By piercing it, you force upon it prolonged stimulation that eventually leads to the nullification of the point. That revalation stunned me and prompted me to reveal the other spots I had intended on piercing next. Each spot I told him had implications on my liver, uterus, kidney, and lungs, forcing me to rethink how cute my constellation of piercings would look versus the prevention or cure of a couple of health problems in the long run.

In the end, I decided to slow down on my collection of piercings, opting to let my current one heal before picking another place to get pierced. I'm still cleaning it every day like a good girl should, but some days I do get pretty impatient. There's a whole world of earrings I can decorate myself with, but there's still five more months to go before I can even think of changing out of my surgical steel stud. But for now, I'm staring longingly at pierced helixes, daiths, and conches.

18 Pairs of Hoop Earrings and Where You Can Shop Them