Celebs speak up on why they run to stay in tip top shape. 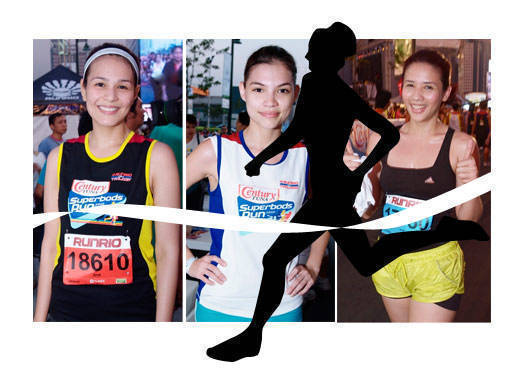 With thousands of people showing up at the wee hours of the morning to participate in races across the Metro, it's pretty obvious that running is the hottest mode of fitness du jour. From celebrities like Bianca Gonzalez, Maricel Laxa-Pangilinan and Christine Jacob-Sandejas to Senator Pia Cayetano, many famous faces have been lured into the high-calorie burning sport.

But to non-runners, the allure of waking up early on a weekend to sweat profusely in a crowd of strangers may not be that appealing. Actress, singer and running enthusiast, Karylle, sheds some light on what she loves best about the sport—“I love training in the mornings with my coaches and my team. I love the vibe everyone has on the track—everyone saying good morning with the brightest eyes and the biggest smiles. I love the fresh air and I love how great I feel after because of it!”

Model Mikaela Lagdameo-Martinez who joins marathons on a non-competitive mode, prefers the personal challenge that the sport gives her. “It's a total and complete work out. I've never trained for marathons, so I take it easy. But I feel it's most effective in firming up, building endurance and discipline. On a lighter note, my most favorite part is the sweat! Makes me feel like a champ!”

To answer the demand of growing sports enthusiasts in the country, Adidas released the second wave of its Philippine Range. A collection of black and gold, white and silver sports apparel and shoes that are decorated with nationalistic iconography from the flag, a line that not only helps us train more efficiently, but allows us to look good while doing it as well.

For those of you who want to jump on the running bandwagon, here are some upcoming races that might help you sweat off your summer pounds: