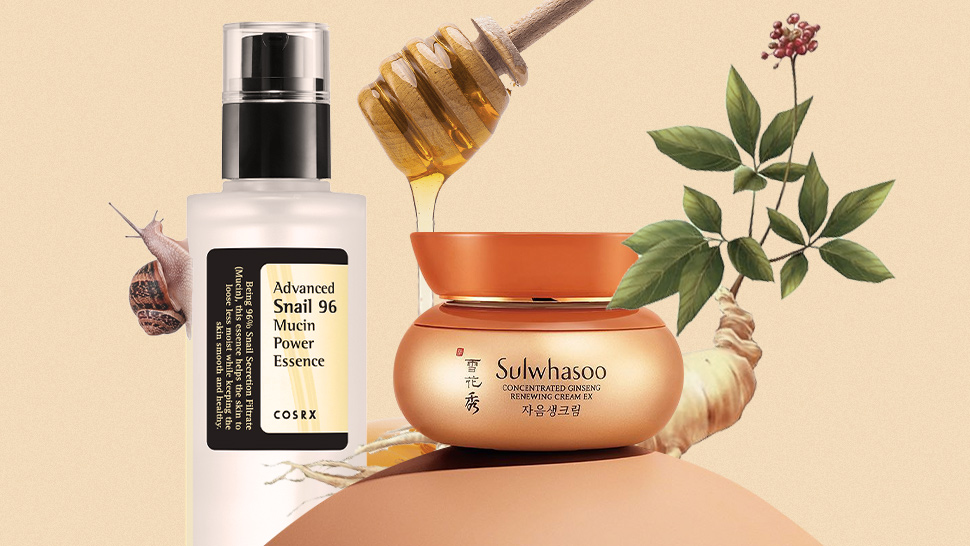 Korean beauty, particularly skincare, blew up because of the highly popularized 10-step Korean skincare routine. But aside from being meticulous about their beauty regimens, plenty of beauty brands from South Korea have also taken the spotlight for the skincare ingredients they use in their products.

The South Korean beauty scene is known for glass-like and dewy skin, which wouldn't be possible if not for their innovative skincare ingredients. Plenty of K-beauty products involve the use of ingredients that aren't as popularly used in its Western counterparts. They're also often made from natural ingredients like those found in plants (and even animals). If you're interested in exploring the wondrous world of K-beauty, here are a few of the most popular ingredients used in Korean skincare:

Snail mucin is one of the popular ingredients you'll often find in Korean skincare products. It's made from the excretion of snails and is most commonly known as snail slime. It might not sound pleasing to slather your skin with such an ingredient but it is actually known to moisturize skin and boost the production of collagen (which improves elasticity of skin). It's also generally friendly to all skin types. Skincare products that are known for having snail mucin include the CosRX Snail 96 Mucin Power Essence.

Aside from honey, another byproduct from bees being used in the realm of skincare is a substance called propolis. Bees create the substance to build their hives. Propolis has long been used by humans for purposes other than beauty (ancient Egyptians used it for embalming, a practice they learned from bees themselves).

In modern times, however, propolis is more known as an anti-acne ingredient in Korean skincare. Propolis has an antibacterial effect, which makes it an efficient choice for fending off acne-causing bacteria. One skincare brand from South Korea called Papa Recipe uses propolis as an ingredient in one of their facial masks.

Ginseng is no longer just something for your grandparents. Various skincare brands in Asia, particularly in South Korea, have made use of the plant root for dermal benefits. Generally, people use ginseng for its anti-oxidant and anti-inflammatory effects. Similarly, ginseng is incorporated into one's skincare routine to utilize its anti-oxidant properties in keeping the skin free from fine lines. It's also said to help in brightening dull skin as well as hyperpigmentation. One of the best-selling products from Korean skincare brand Sulwhasoo is their ginseng-infused cream.

Aloe vera is a staple in many Korean skincare products. It is a widely known practice to slather on aloe vera on severely irritated skin. But aside from providing relief, aloe vera can also be used to treat superficial surface acne and dry skin. It's rich in anti-oxidants and is also anti-inflammatory. Various products, particularly moisturizers, use this ingredient. Recently, there has been a rise in popularity for products featuring Jeju aloe, aka aloe specifically harvested from Jeju Island in South Korea. Brands like Nature Republic carries a skincare line featuring aloe as an ingredient.

Pearl is no longer just used in jewelry but also in several beauty enthusiasts' skin regimens. It is known to be rich in minerals, which is why plenty of products from Asian brands make use of pearl powder for its anti-oxidant and brightening properties. People with dry and sensitive skin are said to benefit more from this particular ingredient because of its "water-holding capacity." Korean beauty brand Missha's line of masks include a pearl variant.

Galactomyces is actually an accidental discovery and isn't originally intended as a skincare ingredient. It's a type of yeast used to produce the alcoholic beverage sake. Many became curious when they found out that the hands of sake brewers were unexpectedly so smooth and wrinkle-free. Upon research, it was discovered that this was due to the presence of galactomyces and since then, the substance has been incorporated into various Asian skincare products.

Galactomyces is mainly used to help minimize the appearance of pores and regulate the production of sebum. It is also said to help reduce acne and brighten the appearance of skin. Korean brand Some By Mi has a product line that uses this particular ingredient.

The Dos And Don’ts Of How To Straighten Your Hair