One actor admitted his tattoos are the "naughtiest" thing he's done. 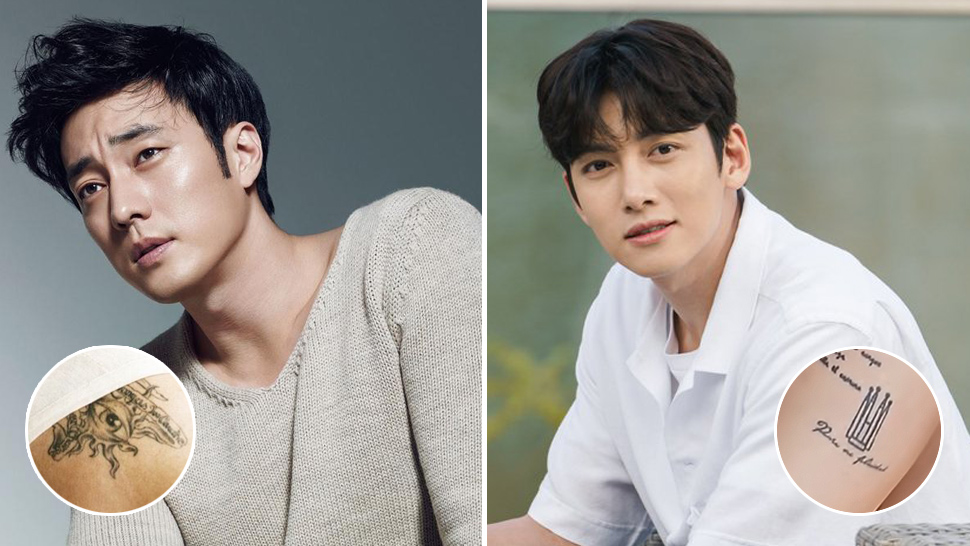 It's no secret that Korean actors aren't the biggest patrons of tattoos. Other than the inconvenience of covering them up while filming, many celebrities just avoid it because of the persisting stigma around the art. (FYI, tattooing by non-medical practicioners are technically still illegal in Korea).

As "unpopular" as tattoos are though, some stars decide to get their dream inks anyway. We've already talked about the Korean actresses who have bravely shown theirs, so it's the guys' turn to be in the spotlight. Below, we delve into three K-drama actors and their tattoos that you might've not known existed. Keep scrolling for more!

So Ji Sub has never hidden the fact that he has tattoos. He's even showed them off in photoshoots for High Cut, Harper's Bazaar Korea, and Singles, and has openly talked about them in interviews. Mind you, his tattoos are anything but tiny: He has an intricate mid-size piece on his back and a half-sleeve tattoo on his right arm!

"The one on my back means, 'I won’t change even if I’m reborn,'" the I'm Sorry, I Love You actor revealed in an interview. "The 51K inside the diamond represents my agency. The building on my shoulder means that I should never forget my dreams. The most recent one on my arm means ‘Enjoy and love life.'"

So Ji Sub then admitted that he had the tattoos done despite it being discouraged for actors. "I know that having these tattoos may be uncomfortable for when I act but I thought it through before deciding to get these," he said. "It's probably the 'naughtiest' thing I’ve done in my life."

Unlike the intricate back tattoo he had in The K2, the ink Ji Chang Wook has in real life is delicate and placed somewhere easily hidden: His thigh. Glimpses of this tattoo are incredibly rare—the clearest being a still moment from his YouTube show Ji Chang-wook's Pomsaengpomsa.

The Healer star has yet to talk about the ink publicly, but fans have identified the structure as the Basilica de la Sagrada Familia, a famous unfinished cathedral in Barcelona, Spain. Ji Chang Wook once posted a photo of it on Instagram, which pretty much confirms the theory.

Below the cathedral tattoo is the phrase "para mi felicidad" or "for my happiness" in Spanish. The actor also has a long verse right beside this ink, though what the lines actually say remains a mystery.

Cha Seung Won's tough image makes it no surprise that he's inked. He has a big angel tattoo on his right shoulder that's accented with the name Rachel below it. Although the story behind this piece isn't common knowledge, the 51-year-old actor does wear it proudly. It's been featured in the A Korean Odyssey star's campaign for the brand Zegna, a photoshoot for L'Officiel Hommes in 2011, and in the 2010 SBS K-drama Athena: Goddess of War, to name a few.

Lee Jong Suk may not have a real tattoo yet, but there's no doubt that he can pull one off. His Ceci cover shoot from May 2014—where he wore everything from a big neck tatoo, finger inks, and a huge back script—is proof enough. In fact, from the looks of the behind-the-scenes video, the W actor had a ball playing around with the temporary inks!

5 Celebrity Tattoos That Went Wrong and the Stories Behind Them

Rica Peralejo Shares The Results Of Her Realistic Fitness Journey

10 Short Haircuts With Curtain Bangs That Will Change Your Look