JUST IN: Jinkee Pacquiao Is One Glamorous Ninang at a Wedding Wearing Accessories Worth at Least P10 Million|Read more »
Beauty | By Nicole M. Arcano - Jan 28, 2021 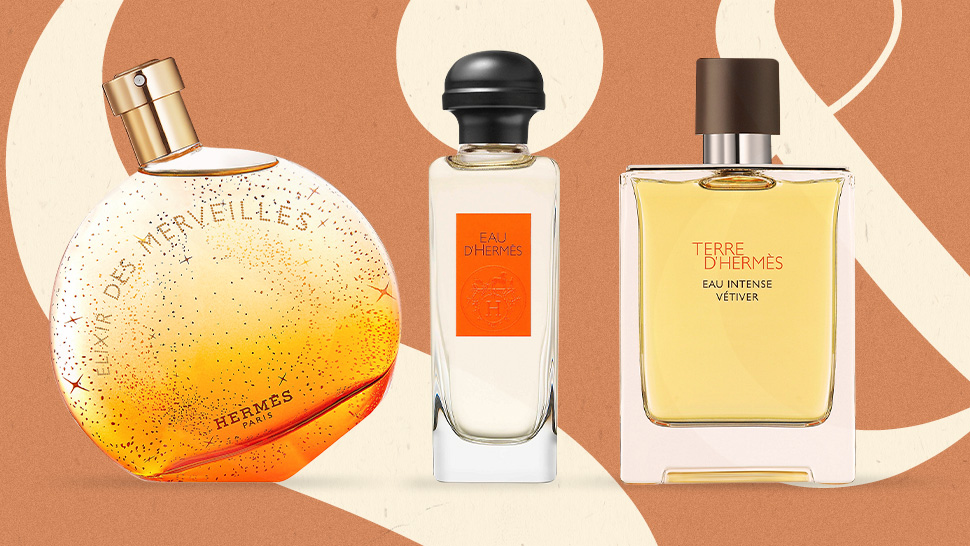 IMAGE HermÃ¨sILLUSTRATOR Bacs Arcebal
These luxurious scents are definitely worth your attention!

Bags and shoes aren't the only collectibles you should eye from Hermes. The French luxury house's fragrances are also worth your attention (and some extra space in your shopping bag), especially if you're in the market for something signature scent-worthy.

With a history tracing as far back as the 1950s, Hermes offers a variety of unique blends, from leather-inspired perfumes to anti-floral scents for women. Their first perfume, Eau D'Hermes, was actually inspired by the inside of the brand's iconic bags (more on that later). Meanwhile, their very first fragrance for women, the Calèche, still has avid fans today despite being launched in 1961, and is often compared to Chanel N°5. Curious to find out what else they have in store? Read ahead to see our top picks!

It just makes sense that Hermès' first fragrance would be inspired by a bag—the smell of leftover perfume inside of it, at least. Made in 1951, Eau D'Hermes is a spicy, leather scent that leaves a trail of refreshing citrus hours after your first spritz. It's for the true Hermès fan (regardless of gender) who loves an unapologetic citrus that makes a statement.

Twilly d'Hermès Eau Poivrée smells as dainty as its pink, mini scarf-wrapped bottle. It's as elegant as the original Twilly perfume except with a vibrant blast of pink peppercorn as its opening note. Unlike its predecessor though, Eau Poivrée dries down to a warm blanket of rose and patchouli that's hard to get enough of.

Another reinterpretation of a classic, this perfume is a bright, woody citrus that's equally clean and luxurious as its award-winning predecessor. It's a combination of bergamot, sichuan paper, and of course, vetiver, that adds a green kick to the Terre's well-loved warmth.

Eau des Merveilles proves that a fragrance doesn't have to be a flower bomb to be considered feminine. It swaps out floral notes for the zestiness of orange and lemon, the sensual kick of peppers, and the warmth of woods. It's the kind of scent we can imagine Pocahontas would wear, and we don't know about you, but that's definitely the powerful vibe we want to channel every day.

The original Calèche was launched in 1961, and it was Hermes' very first fragrance for women. It soon got a modern makeover in the '90s, where it became Calèche Soie de Parfum—a light, floral chypre with notes of aldehydes, rose, and sandalwood that'll remind you of the original's complexity but with a more youthful touch. If Chanel has the N°5, then Hermès' has Calèche Soie de Parfum.

If you're on the hunt for a fuss-free spritz that's still very much Hermes, take a look at their Jardin collection. Le Jardin de Monsieur Li, for example, is a fresh aromatic citrus that feels like a relaxing morning walk through a lush garden. It's sweet, a little minty, yet elegant thanks to the blooming dash of jasmine.

For countries like ours where summer is pretty much all year round, scents like Un Jardin En Mediterranee come in handy. It's a clean, woody citrus that's dominated by the greenness of fig. It'll have you smelling fresh off the shower every time, or as if you just arrived home from a month-long beach vacation.

Jour d'Hermes is a delicate, blooming bouquet of sweet pea, gardenia, and rose—a refreshing romantic floral made vibrant by sprinkles of citrus and invigorating greens. "I wanted to express the essence of femininity with flowers, nothing but flowers," perfumer Jean-Claude Ellana explains.

Combining the warmth of woody amber accords with candied orange and patchouli, Elixir des Merveilles captures the sparkle of youth in a bottle. Having no prominent floral notes, it's exact the opposite of the Jour, but definitely as equally delicate and sensual.

Leather and rose seems like an unlikely tandem, but in Galop, the two mesh beautifully. The rose balances out the bite of the leather, while the leather allows the flower to shine without having it smell like just any perfume. It's also the only true parfum on this list, so you'll need as little as two spritzes to turn some heads.

These Are Jo Malone London's Best-Selling Colognes in the Philippines

These Are Chanel's Best-Selling Perfumes in the Philippines