SHOP: The Preview Beauty Bag Is Officially Here and It's the Ultimate Steal|Read more »
Beauty | By Clarissa Gonzalez - Mar 23, 2022

One of them has matching tattoos with someone in her group! 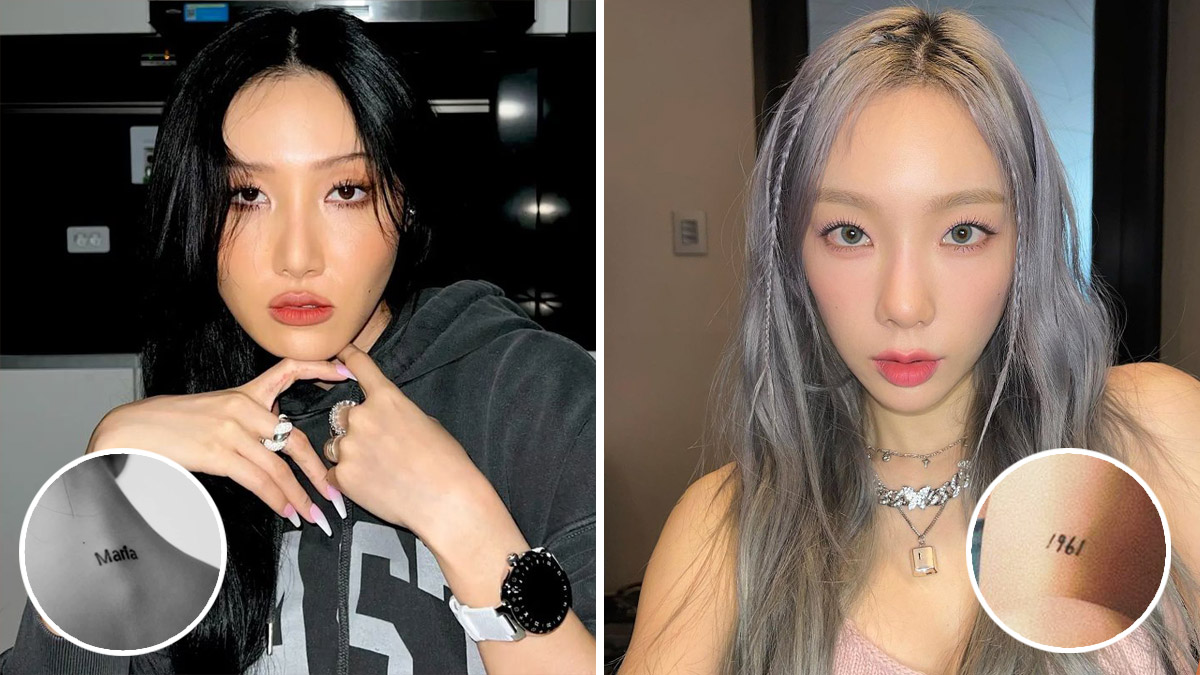 IMAGE (LEFT TO RIGHT) Instagram/_mariahwasa, Instagram/taeyeon_ss
One of them has matching tattoos with someone in her group!
Shares
Share
Tweet
Comments

There's no denying that tattoos are one of the best options if you want to commemorate a special moment or even a special person in your life. They last for a lifetime, and can be unique to only you. That, and the value of self-expression is exactly why we see a ton of celebrities get inked. Korean celebrities are no exception.

Like actors, K-pop idols still need to have their inks covered up for TV shows and some performances. This makes it difficult for fans to see their favorite singers' tatts. Fortunately, their inks don't always stay hidden for long. Ahead, we listed seven female K-Pop idols who proudly flaunt their tattoos, and the special meanings behind their inks.

One K-pop idol that is not afraid to flaunt her tattoos is Hyun Ah, a soloist and former member of 4Minute. While she may have a vast collection of inks, each one is symbolic in its own way. Just take this couple tattoo she got with her fiancé, Dawn. They both have letters etched on their left and right hand, which when placed side by side, spell out the word "life". Notice how Hyun Ah added a small dainty heart on top of her portion of the tattoo for that extra cute touch!

Another interesting tattoo that Hyun Ah has is located on her inner elbow. It reads "60s dad," a tribute to her father who was born in 1960. In an interview, the singer shared that it's actually her dad's words that motivated her to work harder on her music. What a sweet gesture!

Girls' Generation's main vocal Taeyeon has several meaningful tattoos. One of them, which you can easily miss in her videos, is the word "purpose" tattooed on her nape. At a guesting in the variety show Begin Again, Taeyeon explained that this represents her goal of not wanting to live a meaningless life.

Like Hyun Ah, Taeyeon also has a tattoo dedicated to her father, who passed away in March 2020. The ink references his birth year, 1961, and is found just above the idol's left elbow. In an Instagram post, Taeyeon wrote how her father has always been there to support her even from the very beginning of her music career. "I do believe that he is looking down on us from a peaceful place and watching over us," she said.

If you're an observant SONE, you may know that Tiffany has a tattoo on her heel. It was inspired by the slogan and fanchant for Girls' Generation, and the singer got this ink as a symbol of her bond with the group and their fans. In case you were wondering, it means "now, from now on, forever" in Korean!

Since her tattoos are usually covered during live performances, we look forward to every glimpse of Chaeyoung's stunning inks. The first one she was ever seen with publicly is her lips tattoo, which is located on her left wrist. The tatt is colored in both apricot and neon magenta—which happen to be TWICE's official colors!

While Hwasa possesses a number of tattoos, the "Maria" ink on her nape is often hidden by her long tresses. This tatt pays homage to her baptismal name, and it's also the title of her 2020 EP.

Did you know that Hwasa has a matching ink with her best friend and fellow Mamamoo member, Wheein? It's located on the back of their ankles, and they both opted for the word "resonance". While neither has explained the exact meaning behind it yet, we're pretty sure it's a tribute to their passion for music!

Just like her friend Hwasa, Wheein has her own collection of tatts. The simple ink on her right hand, for one, spells out the name of her cat, Ggomo. It was even written in the singer's own handwriting to make it extra special!

Another meaningful tattoo for Wheein is this intricate vintage perfume design on her left forearm. According to her tattoo artist, this was inspired by a perfume bottle Wheein's mother gave to her. To further honor her mom, she had her Latin name "Sophy" written on the bottle as well.

Yeri from Red Velvet once said in an interview that there are certain words that hold great meaning to her. One of these is "stability," which she has inked on her nape. For Yeri, stability is important in her life as she tries to stay in the middle ground, whether it be her sleep or even her emotions.

10 Popular Tattoo Designs And the Meanings Behind Them

8 Filipino Celebrities with Meaningful Tattoos Dedicated to Their Loved Ones